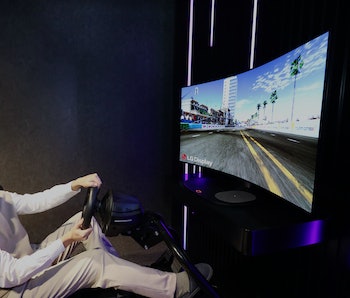 Ahead of this year’s virtual CES, LG Display is teasing an OLED screen that combines a mix of the company’s innovations from recent years. The 48-inch Bendable Cinematic Sound OLED (CSO) display can be used completely flat or curved for deeper gaming immersion, according to a press release.

Curved displays have their applications when it comes to gaming, video editing, and coding, but they don't make for great TVs and can absolutely put a damper on movie night because the viewing angles aren't great unless you're in the sweet spot right in front of the display. This new model doesn’t want gamers to have to choose between flat and curved displays — as long as they can afford it.

Technologies collide — LG and Samsung led the curved TV charge about seven years ago, but as prices fell into the realm of reason for more consumers, the limitations of these screens became apparent. Sweet spot problems aside, curved displays mean more (and weirder reflections), take up more space, and look weird mounted to walls. Outside of having curved architecture in your living room, gaming became the most practical use for these displays.

Pushing the envelope even further, LG unveiled a rollable display a few years ago, a pricey, ideological counterweight to Samsung’s low-impact, artwork-when-not-in-use Frame TV. Last year, it showed off flexible displays ideal for airplane cabins. It also started teasing Crystal Sound OLED technology in which the screen vibrates to create sound, on prototype TVs and ultimately in the G8.

This new bendable display pulls the best of these innovations into one package and it has gamers in mind. The thin display bends to a curve radius of 1,000 mm with the press of a button for more dynamic gaming. With a refresh rate of 120 Hz per second, a variable refresh rate range that goes from 40 Hz to 120 Hz, and a response time of 0.1 milliseconds, you can just focus on gameplay.

Transparently sci-fi — Another display expected to make a splash at CES is LG’s transparent display targeted at restaurants and city infrastructure. Eventually combining the two display’s features could provide a stop-gap or outright alternative to AR / VR wearables, as we move a step closer to the bizarre mid-room placement of TVs in science fiction.