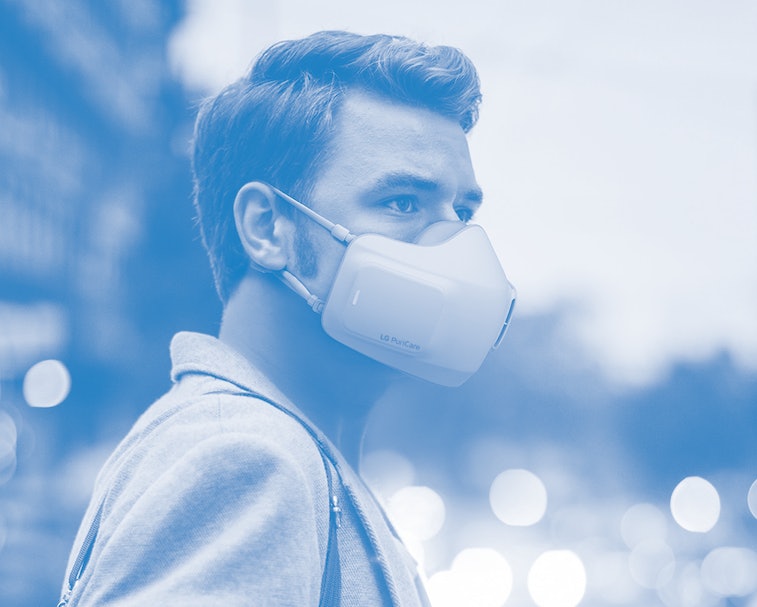 LG has revealed it's making what might just be the most intensely dystopian-looking face mask in existence. The company has announced a portable air purifier that straps around your face like a mask — guaranteed to keep your breathing air clean and also complete your transformation into a Batman villain.

The PuriCare Wearable Air Purifier, which LG plans to show off at German tradeshow IFA 2020, uses LG’s replaceable H13 HEPA filters, much like the ones used in its home air purifiers. Two intelligent battery-powered fans use built-in sensors to detect the direction of your breathing and adjust their speeds accordingly.

With COVID-19 still on a rampage around the world, face masks have quickly become one of the most sought-after fashion accessories of 2020. With functionality still the primary concern for most people, many companies are rushing to figure out the most effective mask technology to keep people healthy, while also being comfortable enough to wear for extended periods and being affordable.

LG doesn’t actually make any claims about COVID-19 prevention in its product announcement, though. But its mask definitely nails the 2020 nightmare aesthetic.

A luxury item for sure — It’s obvious from LG’s first look that the PuriCare mask won’t be for just anyone. The device is made to be top-of-the-line and will likely cost a pretty penny.

The mask can operate for eight hours on a single charge (two hours on high mode), thanks to its 820mAh rechargeable battery. Its sensor system can detect how heavy your breathing is and cycle between its fans’ three speeds to match. So if you're a heavy breather, you'll likely have to recharge it more often.

For added peace of mind, the PuriCare mask comes with an ultra-hygienic case which has a built-in UV-LED light to kill germs. And it communicates wirelessly with LG’s ThinQ app to let you know when it’s time to change the filters.

Does anyone need this? — We’re all more focused than ever before on breathing clean air. Whether or not anyone actually needs this level of air purification on their face at all times is debatable, though, and whether it's going to be comfortable enough to wear all day remains to be seen.

LG claims the PuriCare mask “resolves the dilemma of homemade masks being of inconsistent quality and disposal masks being in short supply.” But we already have much less expensive solutions to do just this, such as reusable N95 masks. Your mask doesn’t need fans and a battery to filter out most harmful particles.

It’s also very unclear whether or not the PuriCare mask filters harmful particles from your exhalations. The CDC actually recommends using masks without exhalation valves for this very reason — to protect both the wearer and those around them.

The PuriCare Wearable Air Purifier is expected to be available by the end of the year in “select markets.” Almost no one will need to buy one, though. Maybe in a few years, though, once climate change has made the air completely unbreathable. Oh no. Now we’re spiraling again.