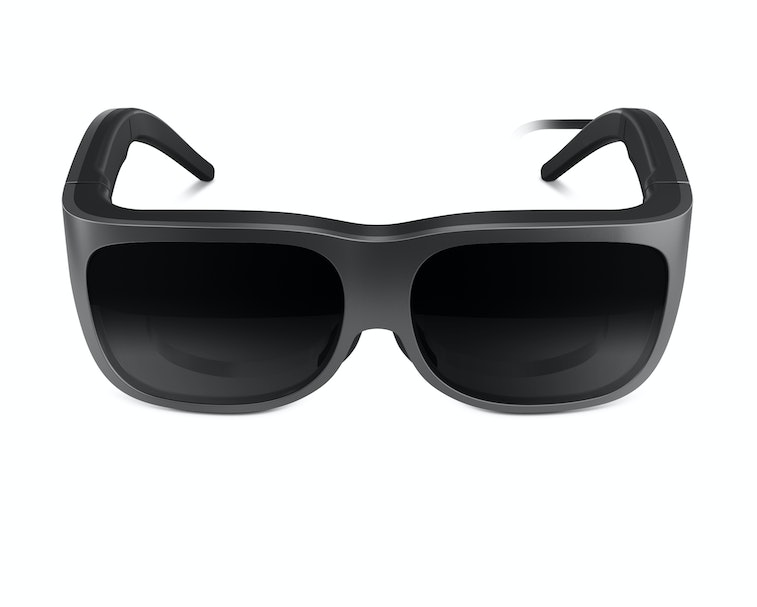 Don’t go in with the wrong expectations, Lenovo’s T1 Glasses only augment your reality in the loosest sense. But while they’re not trying to place a Minority Report-inspired holographic interface on the world around you, the new wearable device Lenovo’s introducing today is real, and potentially useful.

More screen real estate — The Lenovo T1 Glasses (Yoga Glasses in China) are essentially a wearable external monitor. It looks like a thick pair of sunglasses from the outside, but the inside has twin Micro OLED displays (one for each eye) with a 60Hz refresh rate and 1,920 x 1,080 resolution.

You can connect the T1 Glasses over USB-C to a smartphone (Motorola smartphones using a Snapdragon 800 series SOC and up / iOS devices with adapters) or laptop (Windows or macOS) and essentially have a private visual and audio experience thanks to the added speakers built in to the temples of the glasses. There are also physical controls on the glasses themselves for adjusting screen temperature, volume, and other settings.

Lenovo imagines using the T1 Glasses to work on confidential documents without someone peering over your shoulder, watching a video in a larger format, or playing a game in an environment that’s a bit more immersive than what you can get on your phone. The actual size and aspect ratio of the screen you’ll see through the T1 Glasses seems to be relative to whatever device you have connected, and Input has reached out to Lenovo for an estimate of how big of a screen you can expect when you connect your device. We’ll update this piece once we learn more.

The T1 Glasses receive all of their power through the USB-C connection, so there’s no need to charge them up for before you start working or playing. That does mean that your phone or laptop will lose battery that much faster while the glasses are connected, so an extra battery pack isn’t a terrible idea. At least there’s one less thing to worry about keeping powered.

Not exactly smart glasses — Lenovo’s not first to this idea, and it’s joining the ranks of other large companies like TCL in offering wearable glasses displays. In some sense, the idea has legs. People who need a wearable external monitor are a niche market, but as everyone grows more comfortable with the idea of smart glasses in general (Meta will likely brute force it soon), it seems like there could be room for glasses with some Micro OLED displays. And hey, at least there’s no built-in camera to worry about.

Lenovo’s T1 Glasses will launch in China later this year, before coming to other select markets in 2023. The final price will be announced when the glasses launch, and Lenovo says it’s currently aiming to sell them for under $500.