Leaked: Elon Musk’s plan for Tesla is all about car deliveries and solar roofs 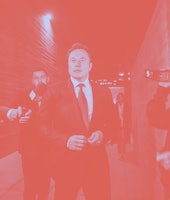 The end of 2019 is less than a month away but Tesla CEO Elon Musk isn’t looking to go home early. Business Insider has obtained an email sent to employees in which Musk outlines his “critical priorities” for December, which will help Tesla meet another record-breaking delivery goal. That includes timely car deliveries, something Musk doesn’t have the best track record with, and a last-dash effort to ramp up solar installations.

“The first is making sure all cars are delivered to their customers before end of year,” Musk wrote. "The second, just as important, is that we immediately increase the rate of solar deployments by a significant degree."

Rallying the troops — This type of email is characteristic of Musk, who is known for demanding long hours from employees towards the end of each quarter to help Tesla hit ambitious delivery numbers. He famously said in an interview that he frequently sleeps on the floor of Tesla’s manufacturing plant in order to save precious time. Color me skeptical of that claim, but the results are hard to deny. Tesla also has a history of pulling employees from every department across the company to help get deliveries done.

The company said in its Q3 earnings report that it expects another delivery record during the final three months of the year. It delivered 97,000 cars last quarter.

Delivery fluctuations — Tesla’s solar business has been a weak spot for the company ever since it controversially acquired SolarCity in 2016. Sales of solar panels have declined, and the rollout of the solar roof tiles the company introduced three years ago has been beset by delays. Musk has said the issues have been caused in part because he moved employees from SolarCity over to Tesla in order to help with the launch of the Model 3, and now they can return to solar panel work.

Tesla is currently building a new factory in Shanghai that will produce battery cells along with Model 3 and Model Y cars, which is expected to help alleviate the capacity constraints it’s long been known for.