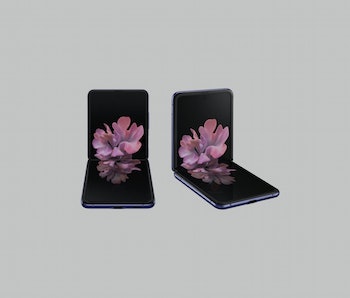 The Galaxy Z Flip has been leaking with reckless frequency — and just when the leaks seem to have died down, something new drops. A tweet from a known leaker, Ishan Agarwal, shows just how the phone's hinges will work. Hopefully this one won’t break in half.

Special fibers and a locking hinge — The leak claims that the Galaxy Z Flip’s hinge will contain “special fibres” to keep dust out. This measure could be an effort to keep the hinge secure and in one piece; similar protections were added to the Samsung Fold in its improved form.

The leak also corroborates and previous leak that the phone’s hinges can be locked at a 90-degree angle, which would allow for it to sit on a table like a cute little laptop. The leaker posits that this could be useful for hands-free video chatting.

Maybe another color incoming — Agarwal hints at another color called “Mirror Gold” that could be coming for the Galaxy Z Flip. Thus far, we’ve only seen the phone in black and purple options, so a third color is very much a rumor at this point.

Samsung is expected to officially announce the Galaxy Z Flip and the Galaxy S20 at its Unpacked event on February 11, so it won’t be long until we confirm or denounce those leaks once and for all.