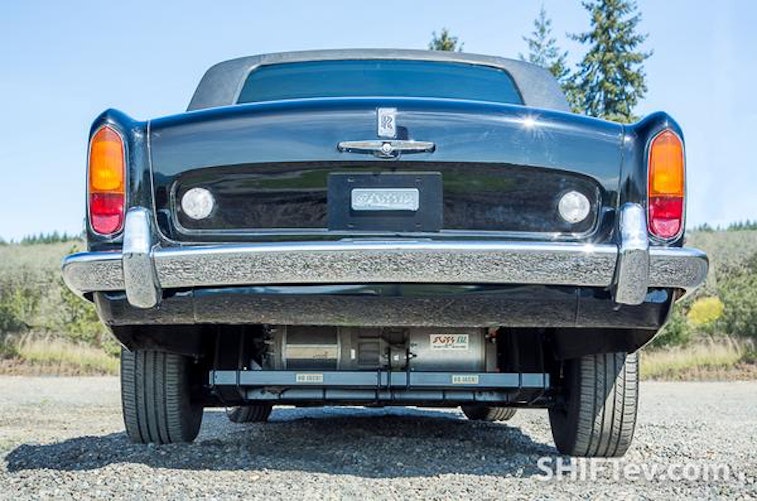 Johnny Cash's 1970 Rolls-Royce has been converted into an electric car using a Tesla powertrain and other parts. The conversion was done by ShiftEV, which does a lot of these types of custom projects.

Often a car being converted into an electric vehicle will use parts from salvaged Tesla's, but the owner of the car (who's not part of the Cash family) chose instead to buy a completely new Model S and strip its parts out (yes, that seems contradictory to the "green" notion of electrification). He had originally planned on retrofitting it with a new combustion engine but decided to go all-in on all-electric instead. The powertrain, the battery, even the center touchscreen were all removed and fitted to the Rolls-Royce Silver Shadow.

Tesla-Royce – Tesla stretches its batteries across the bottom of its vehicles, which can be a problem in retrofits if the car isn't long enough. Fortunately, the Rolls-Royce was long enough to fit the whole Model S battery underneath without splitting it into pieces.

To power the car, the Tesla's drive unit was also installed in the Royce; the drive unit is essentially the car's powertrain that controls the electric motor, inverter, and gearbox. Other components were also used to give the Rolls-Royce luxuries like electric power steering, heating, and air conditioning. To control all of that, of course, the team had to include the Tesla's center touchscreen computer. Because the owner didn't want to change the classic interior they installed the screen in, err, the next most logical place... the trunk.

Junk in the trunk — Though it initially seemed a bit weird to have the touchscreen in the truck, ShiftEV modded the car so that the vintage controls are integrated with the touchscreen. The gas gauge is synchronized with the battery to display the accurate levels, for instance. And important controls like the windshield wipers are still operated by legacy controllers. That attention to detail is pretty great.

The ShiftEV team says the EV Rolls-Royce gets 200 miles of range on a charge, which isn't bad at all considering the car wasn't built to be lightweight or especially aerodynamic. It must be hilarious seeing the faces of Tesla drivers when they see a Rolls-Royce pull up to a Supercharger and actually plug into it.

Tesla conversion kits? – What would be really cool is if Tesla someday decided to sell the parts for these types of conversions. After all, CEO Elon Musk has always said his primary goal is not selling cars but instead moving the world toward environmentally friendly technology.

Moreover, some people just don't like the minimalist aesthetic of Tesla's interiors – for those folks, they could get all the same high-quality internals and shove them into a car they prefer, like a Rolls-Royce (or a Land Rover or Ford). Tesla's EV batteries are legendary, and being taken up by the likes of Mercedes-Benz. So to enable these sorts of conversions all the company would have to do is sell the battery, powertrain, and center console.

Tesla struggles to supply itself with enough batteries as is though, so that seems unlikely. But you can't blame us for dreaming.