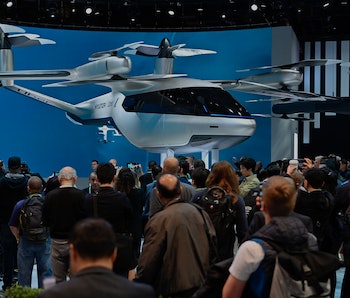 Since October, there has been strong speculation that Uber is looking for a buyer who could save its far-too-idealistic air taxi project from crashing. It turns out that there was a potentially interested party. Axios reports it's the Joby Aviation startup. According to the report, Uber and Joby are in "advanced" talks about the former selling its air taxi business to the latter. The decision could be announced as soon as the end of 2020.

Failure to take off — Initially, Uber presented the concept of aerial taxis as a natural extension of its ride-hailing business. Ubers with four wheels could ferry passengers to sky taxi ports so they could hop to local airports or otherwise make swift, traffic-skipping flights. With support from Joby in 2019, Uber sounded ambitious and confident. It said that it would collaborate Joby and others to create electric aviation for the masses... or something like it.

Soon, however, as it often happens with grandiose claims coming from the tech industry, criticism amplified around the possibility that these air taxis would only add to aerial congestion. Critics brushed these mini helicopters aside, viewing the rides as toys and recreational fun for the obscenely rich. Few people seemed sold on the idea that air taxis could become a form of common urban travel. Additionally, few were convinced that air taxis could solve the issue of rapidly worsening and polluted ground transportation. It seemed like a billionaire's idea of entertainment at best — and a colossal waste of money at worst that would also have to overcome heaps of regulatory hurdles.

Persuasion, not funding alone, will do the trick — It's unclear how effective Joby's potential acquisition of Uber's air taxi project will be. The aerospace startup has raised massive amounts of funding totaling more than $700 million from the likes of JetBlue, Intel, and Toyota. But as Uber's learned, funding alone can't keep a ship like this afloat — or an aircraft like a flying taxi in the air.

It will require convincing industry experts, manufacturers, regulators, and the commuting public that vertical take-off and landing (VTOL) vehicles can become regular, reliable, and safe urban transportation. This means fielding intense questions and criticism about noise pollution, people's safety, urban security, congestion, affordability, the likelihood of failure and damage, how these aircraft will be monitored, how liability will work in the case of accidents, and other critical queries. If Uber does sell to Joby it may be pleased to be rid of the potential headaches.