Jeff Bezos has already 'earned' over $10 billion this week 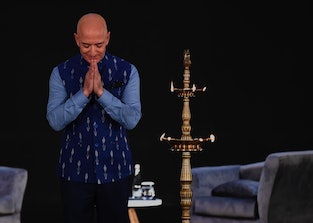 The amount of money Jeff Bezos has added to his net worth since Monday.

The coronavirus pandemic is devastating the global economy and hurting all but the rich, who are consolidating power and increasing their wealth through the downturn. Case in point, Jeff Bezos has added roughly $10 billion to his net worth since Monday on the back of high expectations for Amazon.

Bloomberg reported on Monday that Bezos added $13 billion to his net worth in a single day after Amazon's stock popped 7.9 percent, making his 11 percent stake in the company worth about $189 billion. It fell somewhat on Tuesday, but this week's pop still represented the most money anyone's ever earned in a single day.

To put that bounty in perspective, Bezos in a single day made more than 4,000 times what the average American will make in their entire lifetime. Which is to say, things are going great over in Seattle.

Accelerating the inevitable — Brick and mortar retail was already suffering before the pandemic, but forcing small businesses to close while Amazon can continue to deliver goods has only sped up its trajectory. Over the past few months we've watched a drumbeat of retail players conducting mass layoffs or file for bankruptcy, from JCPenney to Sur La Table and, yes, even Chuck-E-Cheese. Amazon meanwhile has seen its stock rise 73 percent this year. To be sure, the company isn't the only reason retail has suffered, but two-day shipping is hard to beat and the pandemic will reinforce the habit of ordering online where Amazon is king (hence the stock gains).

Strategic moves — Amazon can benefit during a recession in other ways. It can acquire weaker companies at bargain-basement prices, for one — it recently bought self-driving car company Zoox at what appears to be a discount. It can meet increased demand by hiring laid-off workers into low-paying, laborious warehouse jobs. The Amazon business model works not just because of technological innovation but also thanks to its ability to hire labor on the cheap and work people hard. It says it wants to hire 100,000 of these workers during the pandemic.

Bezos, out of the kindness of his heart, is at least allowing his warehouse workers to take breaks to wash their hands and they won't even be punished for it.

Is this level of wealth moral? — People in America like to argue that the potential to accumulate wealth is an incentive to spur innovation and new ideas. But once you reach the level of Bezos it's just self-reinforcing – he's no longer "earning" it. The more money Bezos and Amazon have, the easier it becomes to find tax loopholes (Amazon paid 1 percent in federal income taxes in 2019), buy up companies, and keep the cycle of growth going.

There's no reason any one person needs $189 billion dollars — it's a concentration of wealth that just causes inequality. Amazon makes money hand over fist by strangling small business with its unstoppable size, and distributes the winnings to a small cohort of investors including Bezos. You can be all for free markets and competition, but that's not fair competition. Jeff Bezos is expected to testify in front of Congress soon regarding anti-competitive behavior — let's hope they're prepared with good questions this time.