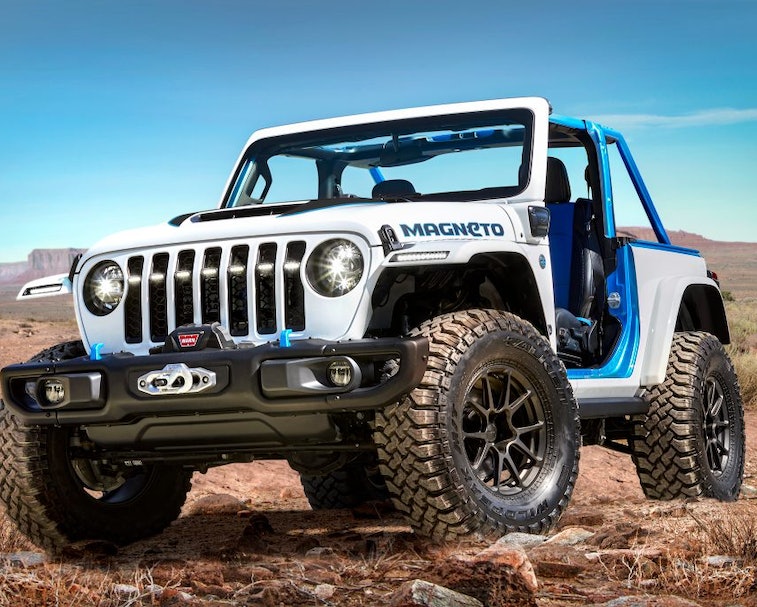 Jeep has taken the cover off its “Magneto” all-electric Jeep Wrangler concept, and the results are, well, disappointing. Anyone who was hoping they could soon purchase an all-electric Jeep should forget about it, as the vehicle that the company unveiled today is nothing more than a DIY hack job that’s unlikely to enter production.

Underwhelming — The Magneto would be a dream for outdoorsy types who want a rock-climbing electric vehicle. It was first teased during the Super Bowl through a website titled “The Road Ahead,” which makes this week’s unveiling even more of a flop. That’s because this car is nothing more than a standard Wrangler with the combustion engine yanked out and replaced with batteries.

Because it was built on a frame designed for a combustion engine and motor, the 70 kWh battery was broken up and spread out around the vehicle:

Powering the Jeep Magneto’s e-motor are four battery packs with a combined power of 70 kW/h, running an 800-volt system. The lithium-ion batteries are distributed around the Wrangler to balance weight on the four wheels. One pack replaces the Wrangler’s mid-ship fuel tank, another is mounted opposite the fuel tank location, the third pack sits atop the e-motor under the hood and the fourth pack mounts in the space normally used for a rear storage compartment, also using space typically occupied by the exhaust muffler.

Based on the data, the vehicle could maybe expect a range of 200 miles on a charge, though Jeep doesn’t specify. The company does say that the car hits 0-60mph in 6.8 seconds and delivers 273 lb/ft of torque.

Behind the times — The Magneto was likely quite expensive for Jeep to make as it uses a manual transmission from a combustion car. Electric cars do not need multi-speed transmissions because they can provide consistent amounts of torque at both low and high RPM speeds, whereas a gas car needs to adjust its gears to do that; including a transmission in an electric car actually creates inefficiencies. But it’s a lot cheaper for Jeep to cobble something together on an existing Wrangler platform than create an entirely new vehicle designed around an electric powertrain.

At a time when the rest of the automotive industry is finally accepting the inevitability of electric, however, it looks a lot like Jeep has no real electrification plan.