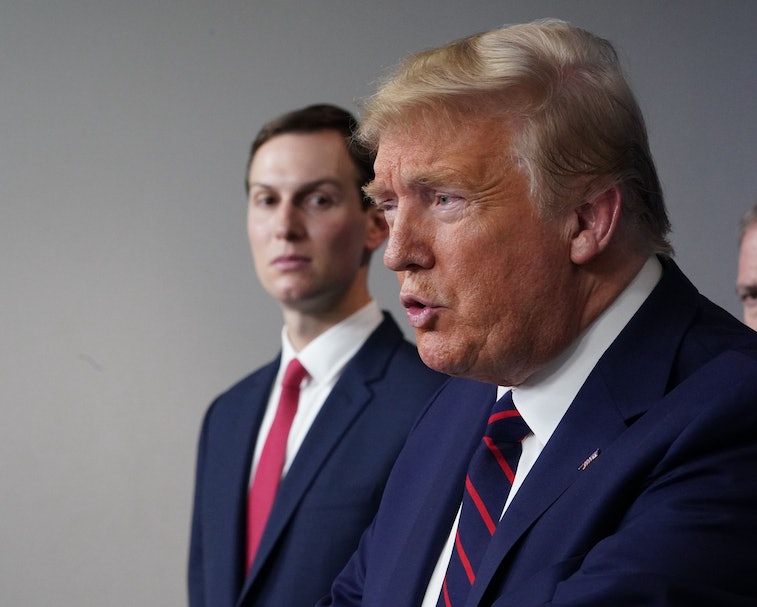 Jared Kushner, senior White House advisor, is attempting to create a national COVID-19 surveillance system, according to people familiar with the discussions, reports Politico. The surveillance system would aim to give the federal government a live look at the spread of the novel coronavirus across the United States and the resources available to treat patients.

Kushner, who also happens to be President Trump’s son-in-law, has played a vital role in the White House’s response to the COVID-19 pandemic — a response which, by most accounts, has been botched at almost every turn. His leadership during the early stages of the coronavirus outbreak leaned heavily on downplaying the potential toll of the virus’s spread in the U.S.

The proposed surveillance network would utilize health data that has long been kept private in an effort to better allocate resources and dictate social-distancing rules across the country. It would also drastically change the way health data is collected and used.

The project brings with it many potential dangers. No matter how you slice it, a nationalized health data network would open U.S. residents to all manners of invasions of privacy. For that to be worth it, the network would need to prove invaluable in bettering the health care system. If Kushner’s recent history is anything to go by, it probably won’t be.

Let’s look at Kushner’s track record — We would be remiss to consider this network’s viability without an understanding of its leadership. Even if privacy concerns are hypothetically put aside for this conversation, the fact that Jared Kushner is running the initiative could lead to serious problems getting it off the ground.

By all accounts, Kushner has been an influential adviser in the White House’s response to the pandemic since the virus first made its way to the United States. Upon his advisement, the White House has made a series of serious blunders that has set the country up for near-complete failure to contain the novel coronavirus.

Kushner’s was one of the main voices calling the media’s response to the outbreak an exaggeration, leading to the administration’s immense downplaying of the situation. Kushner helped pen Trump’s address that inaccurately stated all travel and goods from Europe would be banned immediately, plunging the stock market and sending Americans abroad into a panic. Remember that Rose Garden address where Trump falsely claimed Google was swiftly developing a COVID-19 testing website? You guessed it: Kushner was behind that one, too.

And then there are the privacy concerns — On a quotidian basis, the federal government plays almost no part in handling health data. There are laws that allow special access in times of emergency — but not to the extent that Kushner’s project entails. The national coronavirus database would pull data from multiple private databases to track things like hospital bed and ventilator availability.

But the extent of the data that would be compiled for the network is unknown right now. Depending upon its reach, the network could give the federal government nearly unlimited access to all kinds of private health data. And it’s highly unlikely that access would be revoked after the worst of the pandemic has passed.

If this is sounding a little too familiar, it’s probably because we’ve been through this before. In times of national emergency, measures ostensibly taken for public good come with threats to personal liberties. Take the Patriot Act, for example — introduced after the attacks on September 11, the act allowed federal agencies to monitor personal communications indefinitely, amongst other things. The effects of that loss of privacy have resonated, and they will continue to do so.

The White House has not spoken on this initiative yet. Spokesman Avi Berkowitz said of the rumor: “This story makes no sense and is completely false.”

A national coronavirus network with enough information to actually help the country would take quite a long time to assemble. Kushner’s leadership is unlikely to yield satisfactory results, given his blunders in handling the crisis thus far. In the process, we’ll lose some of the little privacy we have left. And we’re not likely to get it back.