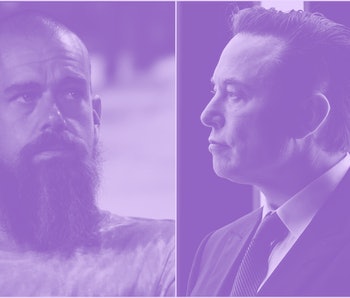 Former Twitter CEO and current Block overseer Jack Dorsey and Tesla Technoking Elon Musk have a new joint venture: constructing a Bitcoin mine in Texas powered entirely by renewable energy. The news, announced earlier today at the Bitcoin 2022 conference in Miami by the mine’s other partner, Blockstream co-founder and CEO Adam Back, comes only three days after Musk’s sudden, not-at-all suspicious ascension to Twitter’s board of directors. Musk’s new role presented itself after the (delayed (... and probably illegal)) reveal that the world’s richest man purchased a nearly 10-percent stake in the social media platform last month.

So now we have Dorsey, Musk, and Back breaking ground on a Bitcoin mine using Tesla’s 3.8-megawatt solar PV array and 12-megawatt-hour Megapack. Clearly, this is a coincidence and nothing at all to be suspicious about.

At least the end goal is good — On the one hand, it’s pretty wild to see Musk insert himself into Twitter — and thereby its parent company, Block — so quickly and brazenly in a way that is surely raising all kinds of red flags over at the SEC. On the other hand... well, at least this project should supposedly result in a net positive.

“People like to debate about the different [environmental] factors to do with bitcoin mining. We figured, let’s just prove it. Have an open dashboard so people can play along, maybe it can inform other players to participate,” Blockstream CEO Adam Back explained to CNBC.

One of the biggest and most immediate drawbacks to the majority of cryptocurrency mining is the immense amounts of energy consumption required to power the industry. Experts have long argued that a scalable Bitcoin is impossible using its current power sources, so to see Dorsey and Musk work towards a sustainable solution could prove a promising turning point for crypto adoption around the globe.

Low confidence — But this is still Jack Dorsey and Elon Musk we’re talking about, two men who seem hellbent on turning the world into some terrifying Snow Crash reality. We won’t believe this endeavor until we see it not only up and running, but clearly providing crypto mining assets within a 100-percent sustainable and green infrastructure.