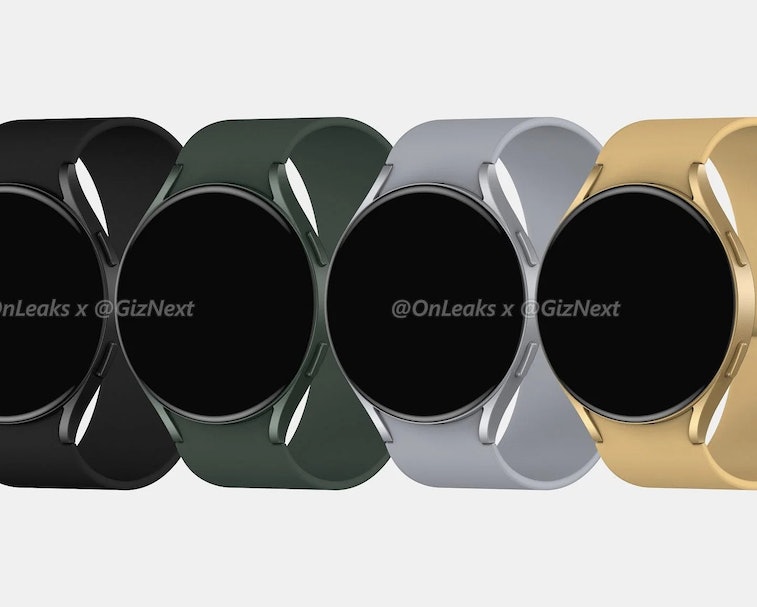 Another Apple Watch rival from Samsung is coming, but can it save Google’s fledgling smartwatch platform?

In artist renders based on leaked information from @OnLeaks, GizNext claims this is what the Samsung Galaxy Active 4 looks like. Expected to launch in four colors (black, silver, gold, and green), the renders depict a smartwatch that doesn’t deviate much from the status quo of Wear (formerly Wear OS) smartwatches. Despite announcing a software partnership with Google at Google I/O, the hardware colors are a far cry from the pastels used in Google’s latest take on Material Design.

Changes to the Galaxy Active 4’s design appear to be mostly minor, featuring tweaks to the band fasteners, rubber strap, circular dial, and buttons. The frame is also getting a facelift and will reportedly be made from aluminum and come in 40mm and 44mm models.

Per GizNext’s report, powering Samsung’s upcoming smartwatch device is a new 5nm chip running the yet-to-be-released Wear operating system announced at Google I/O. GizNext says the smartwatch will launch on June 28 at Mobile World Congress (MWC) 2021. The report states the Galaxy Watch Active 4 will cost under Rs (Indian Rupee) 30,000, which comes out to about $400.

Google at it again — Earlier this year at Google’s I/O developer’s conference, the search titan announced it was hitching its wagon to Samsung, combining both companies’ wearable software to create a unified operating system. The new smartwatch OS, simply named Wear, will marry aspects of Google’s former Wear OS with elements from Samsung’s more power-efficient Tizen OS. The question that we still need to be answered is whether or not this new Wear platform will integrate anything from Fitbit, which is now a Google-owned company.

On the Wear site, Google claims the new OS will be much faster, allowing users to quickly switch between apps and access shortcuts. They’re also redesigning core Google apps like Google Maps, Assistant, and Pay, promising to make it easier for developers to build apps for the new platform. This last claim excites me the most, though, as the only thing that keeps hardware alive is software support from developers. Wear OS has been dying because developers have largely abandoned it. Fingers crossed that Wear will move the needle in the right direction.

Look out, Apple Watch — For Android users, picking a smartwatch has never been simple. If you’re a Samsung user, you probably want a Samsung smartwatch. Otherwise, maybe get a Wear OS smartwatch that’s compatible with most Android devices. Or get a semi-smartwatch like the OnePlus Watch that works with some Android phones, but better with OnePlus phones. See? Too much choice can be overwhelming.

With Wear, we’re expecting to see not only Samsung watches with the operating system, but also other brands. After Samsung, Fitbit and Google devices will probably get the new Wear software first — there are rumors that the Pixel Watch might come out this year. Support from other brands will be key to revitalizing smartwatches for Android. Will it be enough to catch up to the Apple Watch, which continues to enjoy a big lead? If getting Samsung onboard can’t bolster Google’s wearable platform, there may be no catching up to Apple. As someone who refuses to get an Apple Watch, I hope Samsung can at the very least chip away at the Apple Watch’s dominance.