Chinese users will abandon Apple in droves if WeChat is banned 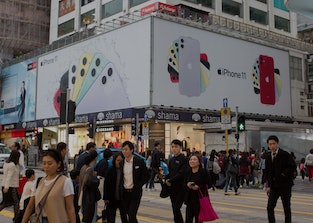 The percentage of 1.2 million respondents to a Weibo survey who say they'll ditch their iPhones if Apple drop the WeChat app.

President Trump's threat to ban Chinese apps including TikTok and WeChat from America over unsubstantiated security concerns could have significant consequences for U.S. brands with overseas operations. That's because, under such a ban, Apple would be forced to stop offering WeChat through its App Store anywhere in the world. WeChat is one of the most popular apps in China and has over 1.2 billion active users worldwide.

Sales in China account for about 17 percent of Apple's overall revenue, and it was the fastest-growing smartphone maker there in the second quarter of this year with 32 percent growth in sales over the same period last year. One estimate found that Apple's annual iPhone shipments could fall 25 to 30 percent if it's forced to pull WeChat. TikTok, meanwhile, operates in China as a separate app called Duoyin and wouldn't be impacted there.

WeChat is a "super app" – In a survey on Chinese social network Weibo seen by Bloomberg, 95 percent of over 1.2 million respondents said they'd ditch their iPhones for another brand should WeChat become unavailable. WeChat is considered a "super app" because users rely on it not just for instant messaging, but to order food, request ride hails, pay for goods like movie tickets, and even play games. American competitors like Facebook have tried to imitate WeChat in their own messaging apps with little success.

A possible win for Huawei — Apple is facing intense competition in China from Huawei, which remains hugely popular there and would be delighted to take back the smartphone market share Apple picked up. Despite Huawei not being able to use Google services and thus being crippled outside of China, WeChat still works perfectly on its version of Android in China.

There were already concerns that Trump's attacks on TikTok could have adverse consequences before the executive order was expanded to include WeChat. TikTok's owner ByteDance is trying to carve off the American (and Canadian, Australian, and UK portions of its service) and sell them to Microsoft, transferring its data to American shores in the process. China could potentially retaliate by putting the squeeze on Apple, which besides selling in China also manufacturers most of its products in the country.

Trump's acting without thinking — Trump's ban has flummoxed a lot of people because it seems like an ineffective and even dangerous way to address concerns regarding surveillance and privacy. TikTok in particular is largely used by a younger demographic to post entertaining videos, and domestic players like Facebook likely have much more personally-identifiable data. TikTok has never been found to be transferring data to Chinese authorities and denies it would do so. Forcing its Chinese owner ByteDance to sell the company and localize its data in the U.S. smells like favoritism because it would make it harder for foreign players to compete in America's traditionally open market. But the inverse is also true, and other countries might make it difficult for American companies to operate abroad, pushing the internet into silos of the sort best represented by China's own Great Firewall-encircled internet.

A better move to address potential security concerns might be advancing federal privacy legislation that applies to all companies operating in the U.S., not just those from foreign competitors. Trump's ban increasingly feels like retaliation for teens bullying him on TikTok rather than a genuine effort to defend national security.