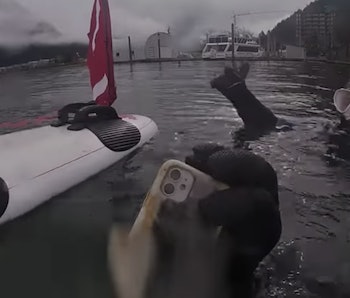 Apple has said that the iPhone 11 can survive being submerged underwater a maximum of 6.5 feet for a duration of 30 minutes. That’s clearly being conservative, however, as two divers in British Columbia, Canada recently discovered.

The married couple Clay and Heather Helkenberg run a YouTube channel called Aquatic Monkey where they document their adventures cleaning up garbage from local lakes. In a recent video, they recovered an iPhone 11 and, after taking it home, were able to turn on the device. Removing the SIM card and installing it in another phone to figure out the phone number, Mr. Helkenberg called the owner to discover that the phone had been lost in the waters six months prior, in September 2020.

From the CBC, which reported on the discovery:

He pulled out the SIM card, put it in another phone to figure out the phone number and got in touch with owner Fatemeh Ghodsi. Ghodsi, who lives in Vancouver, was confused and thought one of her friends might be playing a prank on her. But she was soon convinced and made the trip to Chilliwack to collect the phone, which amazingly still works.

Happy ending — Ghodsi says that the microphone doesn’t work, and the speaker is damaged, but otherwise, the phone still works perfectly. Photos recovered from the phone show moments of her smiling during a ride on bumper boats just before the phone was wrested from her hands by Mother Nature.

“I was in a situation where I kind of lost balance and dropped it in the water,” she said, adding that park staff was convinced it would be impossible to find the phone in the water. “Distressed and in tears, we went back to Vancouver just kind of hopeless,” she said.

While the recovery is a great story for Apple, it’s possible that the specific attributes of the lake in question played a role in protecting the iPhone 11. Harrison Lake, where the phone was found, is a freshwater lake. Saltwater from the ocean surely would have corroded the device.

Apple improved the water-resistance of its devices such as by removing ports, but also through new sophisticated features like a water eject function on the Apple Watch that prevents moisture from remaining in the speaker holes and causing long-term issues. Water resistance doesn’t mean a device is completely waterproof, but brief submersion in water shouldn’t pose a serious risk.

If we were Apple, we’d be sure to find a way to work this tale into a future iPhone campaign.