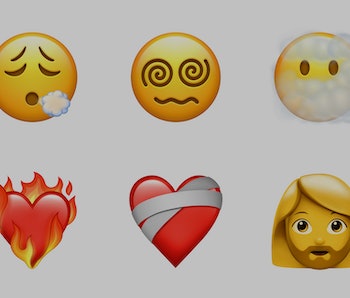 At long last: iOS 14.5 available for download on iPhone and iPad (as iPadOS, of course). As a “dot” update, iOS 14.5 may look inconsequential, but there’s a lot going on, including a slew of changes — most notably the addition of privacy enhancements that allow users to choose whether apps can track them across the internet for the purpose of advertising. But there are other handy features too, like easier unlocking of your device when wearing a face mask, and a wider range of emoji.

Keep your mask on — Having to punch in your PIN or password on a Face ID-enabled iPhone if you’ve got a mask on sucks. iOS 14.5 makes it possible to unlock an iPhone while wearing a face mask... if you own an Apple Watch 3 or later, that is. The smartwatch acts as a secondary authenticator for your iPhone or iPad. It’s neat and it works well.

New diverse emoji options have been added to iOS 14.5, too, including the ability to pick mixed skin tone options for emojis featuring couples.

Stronger privacy — App Tracking Transparency has attracted the ire of Facebook, which could see a major hit to its advertising business as a result of the new feature, which requires apps to request permission from users to track them and their digital activities.

Brands on Facebook pay handsomely for both the ability to carefully target specific audiences and data informing them whether their ads have been effective — that’s the magic of the internet over a medium like TV where it’s hard to quantify success. But without the ability to track Facebook users when they leave its app, the company won’t be able to tell advertisers whether Susan from Minnesota saw one of their ads and went on to buy something or not.

Facebook is pissed off — Facebook argues the change will harm small businesses that rely on its platform to promote themselves and that it’s strong evidence that Apple has too much power over developers. For Apple, the changes are in line with its philosophy of protecting users’ personal information and defending their privacy. Since Apple stood up to the FBI and U.S. government and refused to build a backdoor into iOS following the San Bernardino shootings in 2016, the company has called for stronger privacy across the industry... leading the change itself with more encryption, less tracking, and more transparency.

Facebook can still ask users to opt-in to tracking, but getting them to do so could be a hard sell due to widespread distrust of the company and plenty of publicity about the virtues of opting out (see the video from Apple, below, for example).

AirTag support — Support for Apple’s newest hardware product, the impressive AirTag, is also present in iOS 14.5. AirTags are Bluetooth-enabled device trackers that make it possible to locate any object through the Find My app. The service takes advantage of the billions of iOS devices out there to act as a crowdsourced wireless network.

Competitor Tile has complained to Congress about AirTags, saying that Apple hampered its own efforts to offer equivalent functionality, and that the iPhone-maker promotes its own products in a way that stifles competition. AirTags don’t launch until Friday, April 30, but if you preordered, you should update your device to get it ready.

Siri, no longer a lady by default — Siri is getting some notable updates in iOS 14.5, even if the assistant still isn’t as knowledgeable or intelligent as Alexa or the Google Assistant. It can now speak in two new American-English voices, and because people have long complained that defaulting the assistant to a female voice is sexist, users are now prompted to select a voice when they set up their iOS device.

When you ask Siri to play music, it will also prompt you to choose which media app you’d like to use; over time, Siri will automatically learn whether you prefer Apple Music or Spotify, for instance. For calls, Siri can now let you answer hands-free while you’re wearing headphones, too.

Game on — Other changes to iOS 14.5 include support for the latest Sony and Microsoft gaming controllers, crowdsourcing traffic and accident reports in Apple Maps, and updates to the battery health feature, among other improvements.

To download iOS 14.5, visit the “Settings” menu on your compatible device, navigate to “General,” and choose “Software Update.”