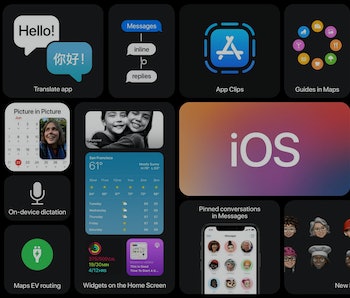 One of iOS 14’s neatest tricks has been buried under the pile of sleek widgets and new porn-watching abilities. The forthcoming version of iOS includes a little orange indicator dot to let you know when an app is using your microphone or camera.

The orange indicator shows up on the notifications bar just above the cell signal bars. It’s a noticeable but unobtrusive privacy setting that should improve peace-of-mind for iPhone users. Now at least you’ll know when the FBI agents are listening to you. Or, you know, the TikTok overlords.

Pretty colors — iOS 14 is still in its earliest beta form, which means we're all still just learning about the intricacies of the updated operating system.

While Apple’s Preview website only speaks to the existence of an orange indicator light, early testers have noted other colored lights, too. There’s a green dot when the camera is being used, and a purple one when location data is actively being used by an app.

Some beta testers have also noted that the indicator dot’s left-alignment (and its position in kind of an odd spot) might annoy users with a penchant for a clean notification bar. It’s not clear whether or not the indicator dot is a feature that can be toggled on and off.

Plus extended info — The orange indicator notification is actually only the beginning of the new privacy features. Users will also be able to open up the Control Center and see exactly which apps have recently accessed the camera and microphone.

Buggy or spying? — iOS 14 includes other new privacy notifications, too. One of these alerts users when the system’s clipboard is being accessed, either by an app or another iCloud device.

Twitter user Jeremy Burge noticed that this notification, in particular, has been popping up way more than expected during testing. He first considered this a bug — iOS thought he was pasting from a MacBook or something similar — but quickly realized it was only happening with TikTok.

Burge says that to reproduce the notifications you need to just copy any text and open TikTok. Every few keystrokes TikTok appears to be inspecting the clipboard for its contents. None of the copied text actually pastes into TikTok, but the app is definitely looking at the clipboard.

It’s possible, of course, that this is just the iOS 14 beta being buggy. It could also mean iOS 14’s new privacy features are doing exactly what they’re meant to do: Alert us to background processes that might invade our privacy.

Apple’s increased focus on privacy and transparency for users is very welcome indeed. Who knows which other apps we’ll find spying on us?