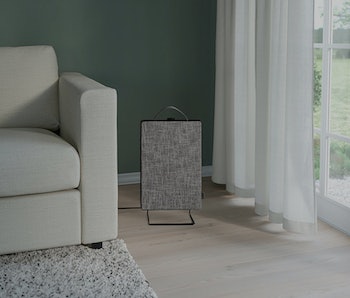 Ikea’s first-ever air purifier goes on sale today in the United States, and it’s nothing short of a miracle. And by that we mean it isn’t an eyesore — which is a rarity in the air purifier market, as anyone who’s ever shopped for one can tell you.

The $55 Förnuftig air purifier was made with this very problem in mind. Ikea designer David Wahl found that any good-looking purifiers were very expensive, and even those weren’t very efficient. “When we develop at Ikea, we also do it from a home furnishing perspective,” Wahl says on the Ikea website, “and we want Förnuftig to blend into the home.”

Though we haven’t been able to try the purifier out for ourselves just yet, we’re certainly intrigued by its affordability and truly unique appearance. Once again Ikea is pushing the boundaries of home design. And this time it might even help keep us healthy.

It mounts to the wall — The Förnuftig does not look like an air purifier. If you walked into a room unaware of its purpose, you might sooner think it a smart speaker than an air-filtration device. The case comes in either black or white, with a fabric-covered charcoal front.

At 12 by 18 inches — and just 4.5 inches deep — it takes up decidedly less space than the standard purifier. You can leave it on the floor using the included minimalist stand, but you can also mount it to the wall either vertically or horizontally. However and wherever you position it, you’ll really confuse houseguests when you tell them it’s not a speaker.

And it puts in the work — Of course, the Förnuftig wouldn’t be of much use if it were this attractive but didn’t actually make the air in your house more breathable. Good news: it does actually work as an air purifier.

The Förnuftig uses a dual-layer filtration method. The first is a replaceable HEPA 12 filter that blocks dust and pollen; the second is a gas filter to reduce pollutants like formaldehyde and filter cooking odors. The purifier has three different fan modes: low, high, and sleep mode.

As a minimalist device, the Förnuftig is best for small rooms. It has a clean air delivery rate (CADR) of 130 cubic meters per hour, which means it won’t be able to carry out its 99.5 percent particle-absorption rate if it’s in a room much bigger than an average bedroom (max 105 square feet), according to this Wired review.

We’ve been increasingly obsessed with Ikea’s latest releases, which continue to push the boundaries of the company’s classic home goods line. And the Swedish company is consistently working on initiatives to save the environment, too.