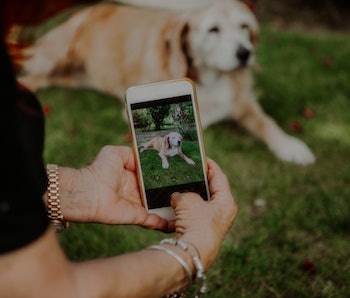 Apple introduced a new tool this week that makes it easy for iCloud users to transfer their entire photo and video collections to Google Photos. It's an unusual case of interoperability from the company known for its "walled-garden" approach which tends to keep services like iCloud and iMessage limited to its own hardware, so that customers tied to those services keep buying its hardware.

To transfer a library to Google Photos, users need to visit Apple's privacy website and sign in to their iCloud account. From there, a new option will appear called "Transfer a copy of your data." Going through all the steps will transfer an entire library to Google Photos, as long as the Google account in question has sufficient available storage.

Does it matter? — Google is discontinuing unlimited free storage beginning in June 2021 — if you're like most people and have a large photo library on your phone, you're going to have to cough up for more storage. Maybe Apple is allowing the transfers now that the competing service will be less enticing. Google and Apple's premium storage plans are priced identically, though the former offers more free storage upfront — 15GB on Google Drive versus 5GB with iCloud.

Giving users some redundancy and choice in where they store their libraries is a good thing. Even if someone doesn't intend on switching to Google Photos, having the option to export to another service can give users peace of mind that their photos will be easy to take elsewhere in the event of some type of disaster... or a change of either heart, or phone brand.

It was already possible to export photos from iCloud before today by simply installing the Google Photos app on an iOS device and conducting a manual sync. But for very large libraries, it could take a long time. With Apple's new service, the company will do all that work for you — it says that the transfer process can take anywhere between three and seven days.

Certain file formats won't transfer, like Live Photos. Only the most recent edit of a photo is transferred, rather than the original. And certain metadata might not transfer either.

Motivations — It's possible that Apple was motivated to offer this transfer service to head off growing antitrust concerns and looming threats from regulators. Critics say that the company's control over the iOS ecosystem gives its own apps an unfair advantage over those from rivals and stifles competition in the process.

Apple has responded by slowly opening up iOS, such as by allowing users to change their default apps for web browsing and email. It still does not allow users to change the default music app, however, and is in a legal battle with Epic Games over the fees it charges developers for sales of their paid apps in the App Store. Also, users cannot download apps that haven't been approved by Apple, something that may have to change if regulators get their way.