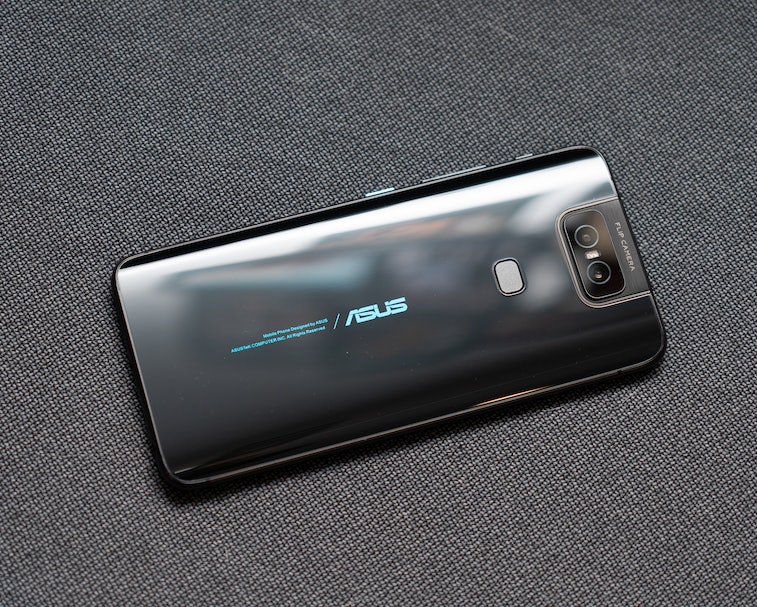 I brought a lot of gear to CES, but the gadget that really had my back was my Asus ZenFone 6. You might find that surprising because, well, Asus isn't exactly a popular smartphone maker. The company muddled around with not-exactly-fantastic budget phones for a while, then the CEO stepped down, and the company came back hard with a second ROG gaming phone and the affordable all-arounder: the ZenFone 6.

The ZenFone 6 sits in the same category "affordable flagship" category as the OnePlus 7T. For the between $499 and $599 you get the same Snapdragon 855 SoC and even the same 48 megapixel camera (sans OIS, sadly), so why not buy the more popular OnePlus?

The ZenFone 6 is a kitchen sink Android phone: it has a huge battery, a motorized camera, expandable storage, and a headphone jack.

Battery Life — Remember when we despaired that phones were becoming too thin and gave us meager battery life? Well Asus didn't hesitate to give us the thickness with the ZenFone: it's a chunky 9.2mm thick because it has a 5,000mAh battery which, for the record, is giant. The OnePlus 7T has a 3,800mAh battery for comparison. During normal circumstances I can easily get two days out of the ZenFone, but CES is totally different workload.

At any given time I was using the hotspot, taking pictures, editing and uploading said pictures, shooting video and using Slack constantly. According to AccuBattery I’ve been getting seven hours of screen-on time and 101 hours of screen-off time. And that’s with a CES-level workload!

Dual SIM and microSD — Most dual-SIM phones allow you to have either two SIMs or one SIM and one microSD card in your phone at a given time. The ZenFone 6 lets you have all three at once. Here in the U.S. we hardly ever get dual-SIM devices at all, let alone this rare example of microchip maximalism.

I need all three because I have one SIM that has my phone number, another that has an unlimited data plan, and of course a 400gb microSD in the expandable storage slot. This way I can dump a full set of pictures from my mirrorless camera onto my phone’s microSD card then let it backup to the cloud as fast as it can while I keep shooting.

Camera — The most unusual thing about the ZenFone 6 is its camera. Instead of the typical notch or bezel, the ZenFone flips the back cameras toward the front on a motorized flap. For the longest time I’ve asked “why can’t the front camera be as good as the back camera?” and Asus was the company that heard my call.

But the draw of the camera isn’t just the flip mechanism that it sits on. The main lens uses Sony’s IMX586, which is a very large ½ inch, 48 megapixel sensor, and its appeal is its versatility. The large size of the sensor improves dynamic range, bokeh, and low-light shots, but in good lighting you can switch to Pro mode and squeak out all 48 megapixels and edit to your heart’s content.

Hacked Google Camera — Thanks to the vibrant Google Camera modding community there’s a hacked version of Google Camera that works well on the ZenFone 6. And when you combine the ZenFone’s large 48MP sensor with Google’s multi-frame HDR, magic happens. Well, it makes shooting in a Vegas hotel a little more possible, which is its own kind of magic.

Until now I haven’t mentioned the 13MP ultrawide camera on the ZenFone, and that’s because it kinda stinks. All ultrawide cameras, including the one on the iPhone, kinda stink. But when you have the power of Google Camera, suddenly you’re taking only moderately bad ultrawide photos rather than nightmarishly terrible ones.

The rest — My friends know that I love the unloved Android phones of the world. After all, I bought an Xperia 5 and would’ve kept it if the fingerprint reader worked. But Asus has something good going on with the ZenFone 6. Not only has the phone gotten an update to Android 10, Asus has released two updates since then that fixed a handful of small bugs. And if the ZenFone 6 can hold its own during CES, it can probably stand up to the trials of everyday life just fine.