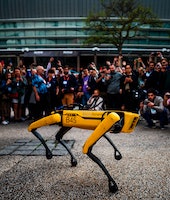 South Korean automaker Hyundai has completed its purchase of Boston Dynamics, the robotics company that markets its products as capable of replacing humans for dull or dangerous tasks. Its most infamous robot, Spot, is a dog-like agile machine that has four legs and uses a series of cameras to navigate and survey varying environments. The Stretch, meanwhile, is a package handling machine that uses a robotic arm to grab and move boxes around in a warehouse.

Hyundai is buying an 80 percent stake in Boston Dynamics from its current owner, SoftBank, which will retain the remaining 20 percent. Its purchase price values the robotics company at about $1.1 billion. Boston Dynamics was previously owned by Google, which bought it in 2013 only to sell it a few years later.

Automation — Those two companies might have struggled to find a market for Boston Dynamics’ robots, but as products designed for automating repetitive tasks, they could fit naturally within Hyundai. The Stretch could be used to move automotive parts from a truck to a conveyer belt, for instance. The robot sits on top of an omnidirectional base and uses an array of suction pads at the end of its arm to pick up and move boxes from one place to another.

With a robot, there’s no risk of injury liability, and the Stretch can keep operating past the standard eight-hour shift. Whether it’s a good thing to replace warehouse workers or not is a thorny question. One estimate finds that 670,000 jobs were lost to automation between 1990 and 2007 and that trend is expected to continue. Optimists say that robots create new jobs and industries, but getting an education in these fields is out of reach to some. That’s more of a systemic issue not created by companies like Boston Dynamics, but corporations are certainly unapologetic about reducing labor costs by trimming workers wherever possible.

Boston Dynamics has come under fire in the past for selling Spot to law enforcement agencies like the NYPD, which used it to surveil neighborhoods for crime. Hyundai has suggested that it will focus on applying the company’s technology in manufacturing, construction, and automation. It hasn’t revealed much in the way of specifics but has said that it would extend Spot into services like healthcare, where the robot could serve as a guide dog for the blind. Boston Dynamics’ robots utilize artificial intelligence and machine learning for navigation and intelligence.

Hopefully, for poor Spot, it might finally have found its forever home.