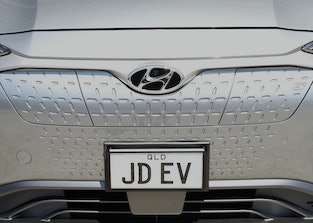 The estimated cost of the Kona recall.

Hyundai is facing a major blow to its electrification plans as it's announced it will spend $900 million to recall 82,000 of its Kona electric vehicles over battery fire risks, Reuters reports. The Korean automaker has laid out an ambitious plan to electrify its vehicle lineup, with its latest addition, the eye-catching Ioniq 5, expected to go on sale in the first half of this year in Asia, Europe, and the U.S.

The recall mostly concerns the Kona EV, Hyundai's best-selling electric vehicle and one that has received largely positive reviews. The automaker produces several other EVs under its own brand, as well as some under its Kia subsidiary.

Second setback — The Kona EV was first recalled in 2020 over a software update that seemed to cause a series of fires. But one of the recalled Kona's caught fire in January, suggesting the applied fix wasn't sufficient to remedy the problem. Overall there have been 15 reported cases of fires involving the car.

Hyundai purchases batteries for the Kona EV from LG Chem — that company was quick to deflect blame for the fires, however, saying that Hyundai's implementation of fast-charging is the source of the issue. That's particularly concerning because Hyundai has touted the speedy charging abilities of its new electric car platform as a standout feature of its upcoming vehicles. South Korea's transport ministry has also contradicted LG, saying that defects were found in its batteries.

According to Reuters, Hyundai is working with LG to split the cost of the recall.

Battery tech — Reports have suggested that Hyundai will source batteries from SK Innovation for the Ioniq 5. But the recall highlights the increasing importance of battery technology to the automotive industry.

Tesla, for instance, currently makes its batteries in collaboration with Panasonic, LG, and CATL, but has announced plans to produce its own batteries. It wants to be able to better control battery production and drive down costs, including by making them last longer before they need to be replaced.

Batteries are the most expensive component in electric cars, and bringing down their cost is key to mass electrification in the automotive market... it could also help preserve Tesla's lead in the EV sector, where a growing number of rivals are eager to eat into its market share.