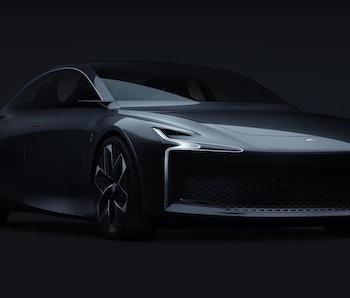 French upstart Hopium has begun accepting reservations for its first production car, the hydrogen-powered Machina. The zero-emissions vehicle promises more than 500 horsepower, speeds reaching 143 mph, and a range of over 620 miles on a full tank of hydrogen.

Hopium has also released some sleek new images of the Machina, which appears reminiscent of an Aston Martin. The company has previously shown a prototype of the car hitting a racetrack in promotional videos.

Hydrogen has yet to take off as an alternative to traditional combustion engines, as the renewable energy source requires entirely new fueling infrastructure. Electric cars can be charged just about anywhere because the infrastructure is already in place.

There are some benefits to hydrogen, though, namely that the vehicles could be refueled just as quickly as filling a gas car. And hydrogen is a dense energy source, which is how Hopium can promise over 600 miles of range. One of the few hydrogen cars on the market today, the Toyota Mirai gets 400 miles on a tank.

That could change as companies including General Motors look to hydrogen as a fuel source for long-haul trucking. Government investment will likely be needed as well, but hydrogen could complement battery-electric cars for people who live in a city and don’t have access to an at-home charger.

Even though hydrogen is zero-emissions, fossil fuels are commonly used in the energy-intensive process required to extract it from water. There are efforts underway to extract hydrogen in a clean manner, but until that happens, how it’s sourced remains a potential bone of contention, too.

Hopium is asking for deposits of $488 to reserve one of the first thousand Machinas to come off the production line. The full purchase price for the car is $143,000, so you’re going to have to be a true hydrogen believer to drop any money on one. Deliveries are estimated to begin in (gulp) 2025. There’s no guarantee that will ever happen, as proven by a wave of upstart automotive companies that have come and gone in recent years.