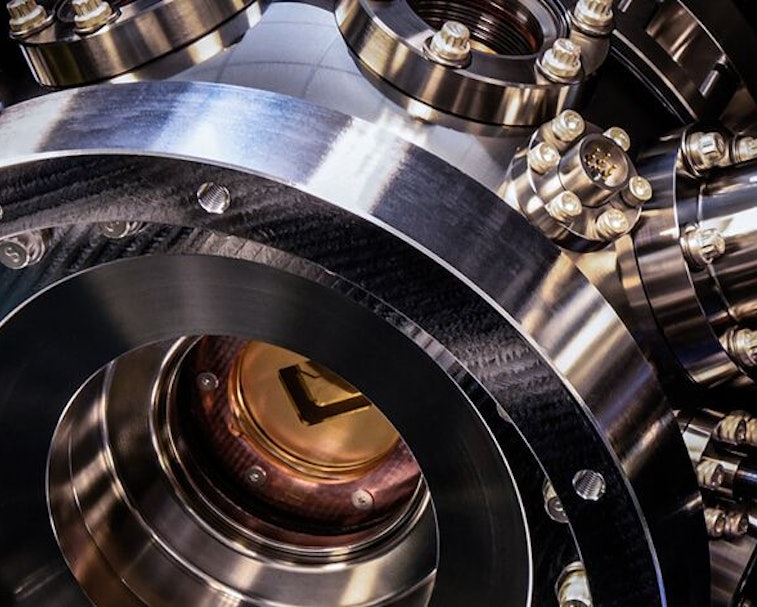 Honeywell has announced it's created the most powerful quantum computer in the world. With a quantum volume of 64, it’s twice as powerful as IBM’s equivalent and more potent than any quantum computer of Google's. When you consider the lack of industry consensus about the metric of quantum volume and IBM being on track to double its volume each year, the announcement starts to lose its shine a little, but only for a split second.

Honeywell’s quantum computer — The machine takes up quite a bit of real estate and looks like '80s popular culture imagined the future. An intense vacuum chamber — a basketball-sized stainless steel sphere — lets in laser light. Within the sphere, the vacuum has five times fewer particles than outer space. As is typical for quantum computers, it’s extremely cold — colder than the surface of Pluto, in fact, a frigid 10 degrees above absolute zero, or approximately negative 441 degrees Fahrenheit — thanks to liquid helium.

Scientists shine lasers at positively charged atoms floating above a gold-plated silicon chip inside the chamber to perform quantum operations. What are those, you ask? Well, it's got to do with quantum physics. In a regular computer, traditional bits are in a state of either “0” or “1.” But a quantum computer has quantum bits — called qubits — which can be in both states at the same time. That property is called "superposition," and it enables a quantum computer to consider many possible outcomes simultaneously.

“For context of how small an atom is, if you cup your hands into a sphere, you’re holding about a trillion trillion atoms,” Tony Uttley, president of Honeywell Quantum Solutions, explains in the companies announcement. If you're wondering why anyone would bother, its because quantum computers can process problems with levels of complexity that regular computers can't handle, something tackled in Hulu's recent series Devs.

Who decides quantum metrics? — Quantum volume (the available computational space) is a metric established by IBM in 2017, but VentureBeat reports the general community isn’t sold on the term. Honeywell and IBM appear to be the only companies wholeheartedly adopting the term, making it a two-horse race for the “world’s most powerful computer” with Honeywell working with ion traps and IBM channeling superconductors. When IBM revealed its latest quantum computer in January, it had a quantum volume of 32, but Big Blue says it expects to double that volume each year, in what feels like a resurrection of Moore's Law.

In general, quantum research is overrun with teams and companies rushing to be first, fastest, or the most powerful when practical applications are still limited. Supercomputers and comparable algorithms are currently far more useful in anything from finance to stemming the spread of COVID-19. Of course, that hasn’t stopped Honeywell from starting to charge the likes of JPMorgan Chase $10,000 an hour to run massive calculations, or partnering with Microsoft's Azure Quantum to grant access to its machine.