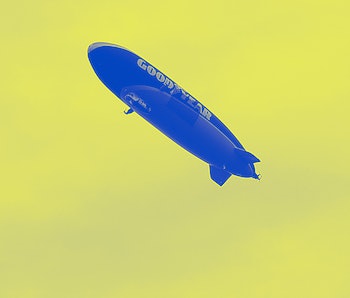 According to multiple recent job listings, the billionaire co-founder of Google, Sergey Brin, is working on a secretive transportation project that aims to construct a new generation of airships for humanitarian and disaster relief work. Positions like "Hydrogen Program Developer," "Senior Airship Mechanic," and "Avionics Technician" based in California and Ohio indicate the company, Lighter Than Air (LTA) Research and Exploration, is attempting to design what would be the world's largest hydrogen fuel cell setup: a 1.5-megawatt hydrogen propulsion system potentially capable of crossing entire oceans. So far, the largest on record is a 0.25-megawatt system, so if all goes as planned, Brin's LTA Research will eclipse that multiple times over.

"We ultimately aim to create a family of aircraft with zero emissions that, when used for shipping goods and moving people, would substantially reduce the global carbon footprint of aviation," reads LTA Research's website. "With these next-generation airships, we strive to improve humanitarian aid delivery and reduce carbon emissions, while providing economic opportunity and new jobs to Americans."

Potentially vital to electric aviation's future — As noted by TechCrunch, hydrogen cells could be critical to the future of electric aviation because they are both potentially less expensive and lighter than their lithium-ion counterparts. In the past, the fueling method could be both heavier and more difficult to maintain, with the added danger of transporting large liquid hydrogen tanks, storing liquid byproducts, and contending with waste heat.

The article also notes that the battery-powered Pathfinder 1, LTA's first crewed prototype, aims to begin test flights later this year. As LTA's project progresses, it will almost certainly work in tandem with Global Support and Development, Brin's nonprofit disaster relief organization which has aided in multiple events in recent years.

Not the only company researching hydrogen cells — Hydrogen fuel cells, once considered too costly and bulky, are now increasingly seen as viable, eco-conscious alternatives to traditional fuel methods. Late last year, Airbus unveiled its own concept designs for a line of hydrogen-powered planes, while GM announced a new partnership with Navistar (stepping in to fill the void left by Nikola) for a line of hydrogen cell vehicles just last month.

Of course, for those looking for a wild card, there's also Archer, an electric flying cab startup created by people with absolutely zero aviation experience. More power to them, but we'll probably stick to whatever it is that Brin is cooking up.