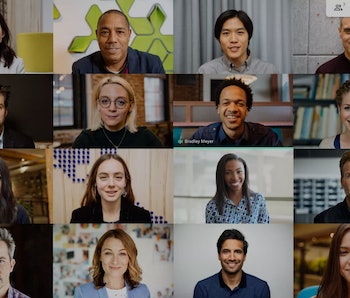 Google’s lesser-known video chat application, Google Meet, is becoming free for everyone, the company announced this morning. Meet is the company’s more premium video-conferencing option, and it’s usually limited to paying G-suite customers. Anybody with a Google account can now create free meetings of up to 100 people.

Google calls the move a way by which it can keep bringing people together, both for business and for pleasure. It’s only this free for now, though — after September 30th Google reserves the right to cap free meetings at 60 minutes.

Both of Google’s other video-chat services, Duo and Hangouts, have long been free, but neither is suitable for large business meetings. Because joining a Meet session requires a Google sign-in and is encrypted it should hopefully cut down on security and privacy concerns.

This is an obvious move to compete with the still-burgeoning popularity of Zoom, but it’s one we’ll gladly take advantage of.

Duo vs Hangouts vs Meet — Google has three different video chat products now, and they’re all pretty similar. That can make it a little confusing when deciding the best one to use in any given situation.

Hangouts is one of the last remnants of Google+ (RIP) and is integrated into lots of other Google products. You can make a Hangouts video call from Gmail or Google Calendar, for example. It supports up to 10 callers at a time and includes some group games and AR effects for casual chats. Hangouts hasn’t seen much action from Google lately, and it’s likely the product will leave Google’s lineup entirely in the future.

Duo is more like Google’s answer to FaceTime. It’s supported across both Android and iOS devices, and you can call anyone in your contacts without them having the app or a specific meeting open. There’s no chat feature — this is just for video calling. Whereas Hangouts hasn’t really seen any major updates lately, Duo is still increasing its capacity (up to 12 people now) and improving video quality.

Meet is Google’s enterprise solution, the grown-up, professional version of Hangouts and Duo. The top-level of access includes support for up to 250 participants or 100,000 viewers on any given meeting. It has screen-sharing options and other business-focused tools.

Capitalizing on controversy — Google would just like to take this time to remind you its video-conferencing platform is much, much more secure than Zoom’s. Most of today’s press release is dedicated to hammering that fact home.

And Google is right to capitalize on its security features because they really are what separate Meet from Zoom. Besides requiring a Google account to sign in, Meet is encrypted both while live and in how it stores recordings in Google Drive. Meeting codes are complex, and host controls are robust, allowing admins to deny entry or boot specific users if necessary. Those particularly concerned about security can even sign up for Google’s Advanced Protection Program, which uses further-enhanced verification processes to keep data private.

Facebook and Microsoft are also using Zoom’s success to their advantage, adding new features and jumping on every opportunity to bring in new users.

Google’s decision to make Meet free will likely bring in many more users, especially because the product will soon be integrated into Gmail, too. And it’s demonstrably safer than Zoom, which is still in the midst of a pretty massive security crisis. Meet isn’t going to kill Zoom — it’s topped 300 million users at this point — but Google is ready to cash in on its piece of the pie. It might even convert some users to paid customers in the fall.