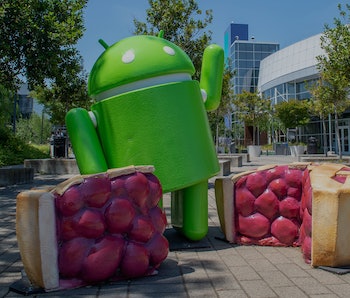 Google is cutting the commission on its Play Store from 30 percent to 15 percent for developers that generate $1 million or less in revenue in a year, the company announced on Tuesday. The change takes effect on July 1. Once a developer reaches the $1 million threshold, Google’s cut returns to 30 percent.

“With this change, 99 percent of developers globally that sell digital goods and services with Play will see a 50 percent reduction in fees,” Sameer Samat, VP for product management said in the blog post announcing the move.

“These are funds that can help developers scale up at a critical phase of their growth by hiring more engineers, adding to their marketing staff, increasing server capacity, and more,” he added. Interestingly, the change applies to all developers, even those generating tens of millions in revenue each year. And it will apply each year, so big developers are getting a break, too. But critics argue the move doesn’t do enough to level the playing field.

Taking a page from Apple's book — Google's decision to decrease commission fees follows a similar move by Apple but includes a key difference. Last November, Apple lowered its App Store fees for developers with less than $1 million in annual revenue to 15 percent. But, unlike Google, which will reset its counter for developers each year, once a developer makes more than the threshold on Apple’s store in a year they’ll permanently be liable for a 30 percent fee thereafter.

According to Reuters, Epic Games CEO Tim Sweeney blasted Apple’s move and said, "This would be something to celebrate were it not a calculated move by Apple to divide app creators and preserve [its] monopoly on stores and payments, again breaking the promise of treating all developers equally."

Altruism or a preventative measure? — At the end of the announcement, Samat says, "Android and Google Play have always listened to our developer partners from around the world and we continue to take their input into account as we build and run the ecosystem." This is a starkly different position for the company. Google as recently as September passionately defended its developer fee.

We don’t expect it’s a desire to please small developers that’s to thank for Google’s move — after all, with the Apple and Google duopoly, where else are they going to go? Instead, Google (like Apple) is trying to fend off claims of being anticompetitive, and stockpiling ammunition for the inevitable showdown with regulators to come, and the ongoing battle with Epic. One also has to wonder, if Google can summarily cut revenue from most developers in half without flinching, how much has it been making from them until now?