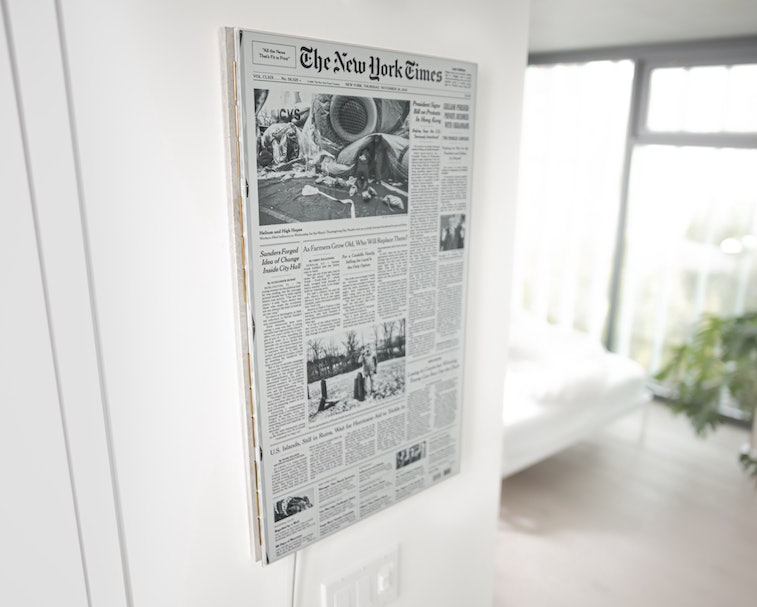 In 2020, e-ink readers are affordable and easy to come by, leaving the world’s library at your fingertips without breaking the bank or destroying too many trees. But newspapers have yet to catch up — the closest experience would be scrolling through the news on a tablet, which doesn’t really duplicate the feeling of reading a newspaper. That’s why Max Braun, Director of Engineering at Google’s Everyday Robots, created Paper, a prototype e-ink newspaper display.

Massive, beautiful, calm — Braun doesn’t want Paper to take over your life in the way most modern technology does. Instead, he calls upon the tradition of Calm Technology, aiming for the device’s black-and-white e-ink display to blend into the background of your life until you need it. The display doesn’t emit any light at all, and it updates overnight without any user interaction.

Maybe this could be the future of smart technology: perfect at doing one task, making your life simpler instead of more complex, and blending seamlessly into your day-to-day rather than being intrusive.

Full frontal — In its current form, Paper is meant only to show the front page of a newspaper. Braun has chosen a 31.2” display for his latest prototype, which allows for the full front page of a standard newspaper to be shown all at once. The front page updates automatically overnight by converting a PDF into an image file. And there’s basically no bezel around Paper, which allows it to look even more like an analog newspaper.

Because of the prototype’s massive size, Braun has mounted his on the wall. He says he usually reads it while he gets ready in the morning.

It will only improve from here — Braun’s goal with Paper is simplicity — there aren’t even any buttons or settings — but that doesn’t mean he won’t add more features in the future. Right now you can only view what’s on the front page, which means you can’t read more than the first few paragraphs of a piece. Braun says he imagines “a more interactive interface or a more seamless transition to other devices” in the future.

Unfortunately, Paper isn’t available to purchase for the time being. The screen alone runs $1,500, so it’s fair to say the device would be a luxury item. But we would definitely buy one if we could — even if it means never finishing an article.