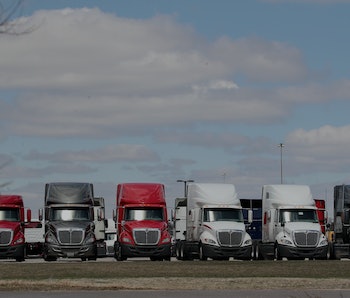 Just a few months after abandoning its tie-up with embattled hydrogen truck startup Nikola, it looks like General Motors is ready to move on. The automaker has announced it will be partnering with Illinois-based trucking firm Navistar and OneH2, a hydrogen fuel cell company, to develop a hydrogen-powered semi-truck.

The news comes as GM also today pledged to transition its entire fleet of passenger vehicles to electric by 2035. President Biden on Wednesday signed an executive order prioritizing climate change across all levels of government, with plans to use zero-emissions vehicles whenever possible.

Hydrogen hopes — The three companies in this new partnership say they will will work together to develop "a complete solution" for a fleet of zero-emissions hydrogen-powered trucks. Hydrogen has heretofore been a promising clean alternative to fossil fuels but has never taken off like electric has because hydrogen requires new fueling infrastructure to be built out.

There exist very few hydrogen fueling stations in existence in the United States, appealing mostly to owners of the Toyota Mirai, the Japanese automaker's continued attempt at making hydrogen happen. There's a hope that hydrogen will find more success in industrial applications like trucking, where centralized refueling is common.

As part of the deal, GM will supply its Hydrotec fuel cells for a truck that Navistar will introduce in 2024; test versions are supposed to be rolled out by 2022. The group says the truck should be capable of at least 500 miles of range with a refueling time of under 15 minutes. That will be impressive if they can pull it off. Tesla has similarly promised 500 miles of range for its battery-electric Tesla Semi, though the vehicle has been delayed several times. The company now says it intends to begin production by the end of 2021.

Nikola headache — GM's deal with Nikola was touted by CEO Mary Barra as an opportunity to get a stake in an exciting new zero-emissions automotive company at a time when demand for those stocks is at an all-time high. It was supposed to be a win-win for GM as the company would receive an equity stake in Nikola, which would also pay GM to use its manufacturing facilities for production. But eventually, it came out that the startup had been less than honest about its progress in developing a hydrogen truck. Nikola founder Trevor Milton stepped down from the company, and after further negotiations, GM curtailed the partnership.

Fortunately for GM, it never planned to invest any actual money in Nikola, so it was able to walk away relatively unscathed. And Navistar is already a major manufacturer of semi-trucks and other heavy duty vehicles under the International brand, making it a far safer bet.

GM for years fought back against California's clean emissions standards for automobiles, only giving in once President Biden was elected. If the next president is a Republican, the company could theoretically return to its prior stance just as quickly. That seems unlikely, though, as the rest of the world moves to ban gas-powered vehicles in the coming decades.