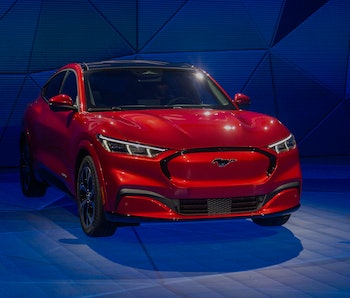 “Dear Ford,” wrote Gerber. “It serves no value to try to compare the Mach e to a Tesla. It is not and it’s not close,” suggesting that the Model Y is superior to Ford’s Mach-E. “Also. [sic] It will serve you to not have your dealers ripping off EV customers with BS $5000 fees.”

Levine shot back, saying that the general public is already comparing the Mach-E to Tesla’s vehicles. He also described Tesla’s Full Self Driving (FSD) feature as “vaporware.” Ouch.

Claws out — Some Ford dealerships have reportedly been marking up the price of the Mach-E, because less frequent maintenance of EVs means less future revenue. The automaker has responded by creating a list of dealerships that don’t inflate the vehicle’s price.

The Mach-E has received strong initial reviews and has slowly begun rolling off the line for early buyers. Ford hopes the vehicle will represent the company’s efforts to roll out more electric cars, including an electrified version of its popular F-150 truck.

Both the Mach-E and the Model Y are crossover SUVs that start at similar prices, though the Model Y performs somewhat better on paper. Levine added in his tweet that Tesla is the real actor ripping off customers by charging $10,000 for its Full Self Driving package, which he characterizes as vaporware because, contrary to the name, it hasn’t lived up to its name and doesn’t actually offer fully autonomous driving.

Full “self-driving” — Tesla’s Full Self Driving (FSD) is currently in a limited beta and early customers have reported that the technology is far from ready for prime time. A recent video published by a driver in a Model 3 shows the car struggling to navigate city streets in FSD mode, even breaking traffic laws as it attempts to cross hard lines and execute illegal lane changes. The driver had to intervene frequently, making it far from “self-driving.”

German regulars, meanwhile, have banned the company from advertising the feature using the current name because they argue it’s misleading.

Vaporware? Sort of — It’s not fair to say that FSD is vaporware because it technically does exist — and it’s been improving... just not at the speeds Elon Musk has repeatedly promised. Tesla first announced back in 2016 that all cars were being produced with the hardware necessary for self-driving, but four years later there has yet to be a full release, and Tesla has repeatedly pushed the timeline back. From the video above, it’s clear that it will be a long time still.

Tesla isn’t the only company in the autonomous driving space that has been forced to push back timelines. Early progress making cars capable of driving down streets deceived companies into thinking that they could solve all the other hurdles faster than was realistic. That optimism has receded in recent years.

But Tesla is the only company to publicly put its technology in the hands of customers before it’s ready. The thinking is that its customers can act as guinea pigs feeding information back to its artificial intelligence software. That strategy has been heavily criticized because of the crashes and fatal accidents that have occurred while Tesla’s vehicles have been in autonomous mode, with drivers showing complacency or recklessness to take their eyes off the road and, in one instance, take a nap.

Levine isn’t totally correct, but he’s not totally wrong either.