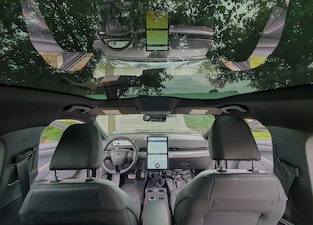 How many Mach-E's Ford's recalled.

The automotive industry is racing towards full electrification, and that’s not coming without its hiccups. While to date it’s mostly been Tesla has been synonymous with quality control issues, both Ford and GM have been forced in recent days to issue recalls of their own electric vehicles over problems like battery fires in the case of Chevy Bolt, and now the glass roofs that might fall off some of Ford’s latest EVs.

If that second one sounds familiar, that’s because Tesla was widely ridiculed last year after a new Model Y owner reported that their SUVs roof had flown off moments after they accepted delivery of the vehicle. Ford, which subtly ribbed Tesla over the issue, is now facing a similar problem with its Mustang Mach-E SUV, and has just issued two recalls in Canada, Electrek reports.

Not ideal — “On certain vehicles, the glass panel of the panoramic sunroof may not be properly attached,” reads a notice from Ford. “Over time, the glass could become loose and separate from the vehicle.”

The Mach-E hasn’t been on the market very long, with deliveries only having started late last year and automotive shortages causing delays. We really enjoyed it when we tested one... but would’ve enjoyed it significantly less had the roof come off. According to Ford, the recall affects 1,812 Mustang Mach-E vehicles in Canada. A second similar recall says that the windshield may not be properly attached, and could come off in a crash. That recall affects another 3,178 vehicles.

It’s unclear if the recall will expand to the United States. All Mach-E’s are produced at the same factory in Mexico. The automaker will notify affected owners, check their roof and windshield, and apply more adhesive if needed.

Recalls — At least Ford is handling this recall proactively. Tesla, on the other hand, has allowed serious problems to persist, like bumpers falling off certain models, without issuing recalls. It finally issued one early this year over failing touchscreen displays, but only following pressure from the NHTSA.

The legacy automakers have their own histories of slow-walking recalls, but Tesla’s vehicles are also generally just known for shipping with cosmetic problems like misaligned door frames, issues that aren’t generally seen in vehicles delivered by other companies.

Over time, quality control issues in electric vehicles — particularly GM’s persistent battery problems — should become less pronounced as the automakers trained in making gas-guzzlers become more experienced at developing on electrified platforms. And maybe Elon Musk will need to cool it with his aggressive production pushes to get the cosmetics right.