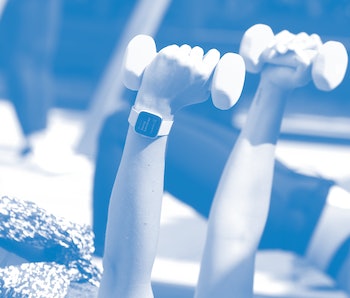 A new software update allows Fitbit Versa and Ionic users to more easily track their blood oxygen saturation (SpO2). The update is available in select markets now and will be rolling out to more in the coming weeks.

Fitbit has always pushed the boundaries of wearable health-tracking devices. The company has come a very long way from its first devices, which were only really able to measure number of steps taken and calories burned. Now that Google owns Fitbit, it’s undeniable that the tech giant is ready to push the fitness tracker past its current limits.

The “new” feature isn’t really all that new; blood oxygen tracking has actually been available in the Versa and Ionic lines since the beginning of the year. But now that data is much more readable to the average user, thanks to Fitbit’s new “SpO2 Signature” clock face, which can be downloaded on Fitbit mobile app.

Blood oxygen what now? — If you’re not into tracking the minutia of your body’s daily operations, you may never have heard of blood oxygen saturation. That’s because, for the most part, the level of oxygen in your blood remains fairly consistent — between 95 and 100 percent during the day and a little lower at night.

Blood oxygen saturation is particularly telling during sleep cycles. If your SpO2 levels rise and fall a lot during the night, you might be suffering from sleep apnea or another health condition. Of course, it’s also possible that Fitbit data doesn’t mean anything at all about your overall health — the Fitbit’s sensors just aren’t accurate enough to be considered medically sound. The company (rightly) recommends talking to a doctor about any concerning data before jumping to conclusions.

More data for Google — The fitness wearables market is predicted to be worth more than $12 billion by 2022. It’s no surprise, then, that Google wanted to wade into this market, especially as other big tech companies like Amazon try to get in that game, too.

Additional health-tracking features are also a reminder that these tech giants now own enormous swaths of health data. The EU is in the midst of a full-scale investigation into whether or not Google’s acquisition of Fitbit gives it access to too much data.

The results of that investigation will set some much-needed precedence around data monopolies. Google doesn’t exactly have the best track record when it comes to health data; it was revealed in November 2019 that Google had secretly been using third-party health data to construct some sort of secretive database called “Project Nightingale.” Google was also found to be accessing health data without consent through the University of Chicago’s medical center.

Your health data is, like everything else in 2020, a commodity. At least that might make it easier to detect ailments like sleep apnea before they impact your life too much.