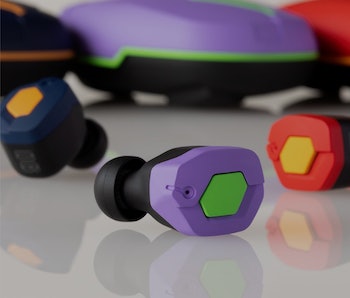 Final has its eyes on one of the sweetest spots of the marketplace: Neon Genesis Evangelion fans. The Japanese hi-fi brand just released its very own Evangelion-inspired wireless earbuds which are already making the rounds on fan boards.

This is a clever product move from the company. Neon Genesis Evangelion-themed products tend to be popular on the internet and don't take too long to disappear from the shelves. Just go look at the Evangelion-themed Tamagotchi or the equally cool Evangelion-tie-in Fender electric guitar.

What you can expect — Final's Evangelion-themed earbuds come with a matching pod-like charging case, and come in bud-matching colors, according to Hypebeast. You can also expect a Type-C charging cable in the box. Each set comes with additional tips so you can find your ideal fit. Here are a few other features:

Diggin' it — Crossover themed products and collabs seem to be getting more popular in recent years. Call it nostalgia, or a way to tether things together so each can benefit from the others glow, but these gadgets win the hearts — and dollars — of many a hardcore fan. For example, Bandai has experimented with the concept for ages, including launching a Gudetama series of minis and a Pac-Man themed one.

All of this isn't to say that final's Evangelion crossover will make other companies nervous about their own audio products. But it's certainly a lot more refreshing than, say, Google's low profile and otherwise largely forgettable second-gen Pixel Buds.