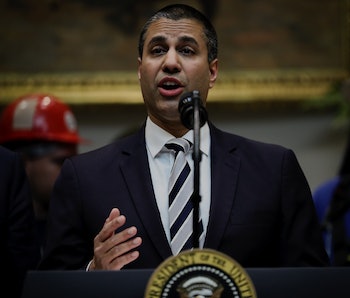 The FCC is expected to fine the nation's four major carriers just $200 million for illegally selling their customers' location data to brokers who let it fall into the hands of shady characters, including bounty hunters. The revelation came following an investigation by Motherboard, which found that for as little as $300, anyone could track down a phone's location to the nearest street block.

The Wall Street Journal first reported on the fines, which the Department of Justice will be tasked with collecting. The carriers — including AT&T, T-Mobile, Sprint, and Verizon — can appeal if they wish. It should be noted that the FCC has not yet confirmed this news.

Lax oversight was the issue — The carriers sold access to phone location data to brokers who were then supposed to offer it exclusively to authorized groups, like police agencies looking for someone on the lam. But what was discovered through Motherboard's investigation was that somewhere along the way, someone looking to make a quick buck would go on the black market and sell their access to such data. It's not hard to see how this could be abused: anyone trying to hunt down their ex, for example, or maybe collect on a debt, could hand over a phone number and a couple hundred bucks and boom, they had access to a map showing where the phone of interest was located.

The carriers basically passed on responsibility for oversight to the data brokers, who obviously weren't doing enough themselves.

This fine has no teeth — Unfortunately, as we expected, this fine by the FCC represents a mere speeding ticket to the carriers.

"Based on today’s news reports, it seems clear Chairman Pai has failed to protect American consumers at every stage of the game — this issue only came to light after my office and dedicated journalists discovered how wireless companies shared Americans’ locations willy nilly," Senator Ron Wyden told Motherboard in a statement. "He only investigated after public pressure mounted. And now his response is a set of comically inadequate fines that won’t stop phone companies from abusing Americans’ privacy the next time they can make a quick buck."

Today's fine is emblematic of a bigger issue in the United States, which is that major tech companies can conduct shady behavior in order to grow with the expectation that in the event they are caught, any fine by the government will be immaterial. Growing antitrust investigations are a hopeful sign that the tides might be turning, however. The FTC, for instance, is closely scrutinizing acquisitions by the major tech giants for behavior intended to squash any potential competition.