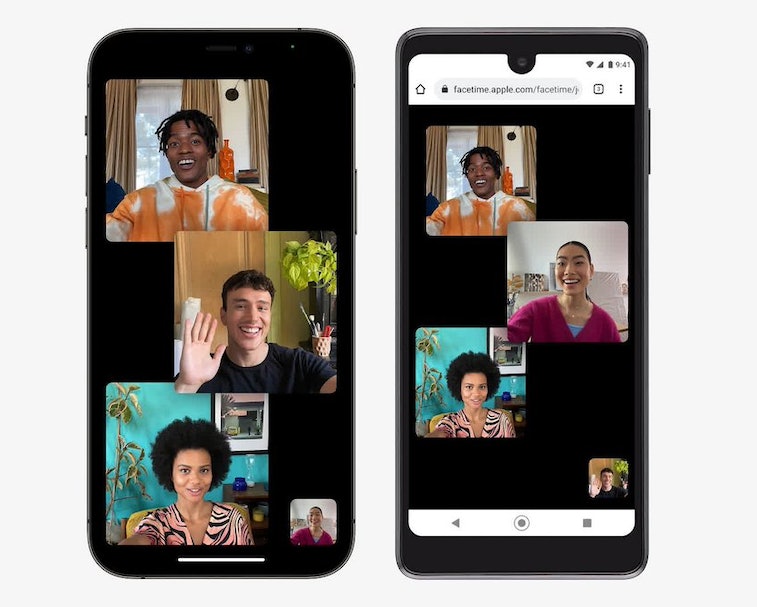 Apple kicked off this year’s WWDC by revealing a number of expansions to the FaceTime app with iOS 15. Some of them are sure to end up being much more useful than others.

Hidden in the five-minute presentation by Craig Federighi was an announcement that extends FaceTime’s reach beyond the Apple ecosystem for the first time. Much like other popular video-chat apps like Zoom, FaceTime will now allow users to send invite links for future video calls in an email or calendar invite — and Android users will be able to join those calls.

FaceTime has long been part of Apple’s highly coveted walled garden, a perk reserved for those willing to buy into the larger Apple ecosystem. Now anyone will be able to join a FaceTime call at any time.

Of course, Apple isn’t just releasing FaceTime into the world. There are caveats here, not the least of which is that Android users will need to join FaceTime calls via a web browser, rather than through an actual app. Anyone who’s tried streaming Xbox games through their iPhone browser will be able to tell you it’s bound to be shaky at best.

This is by far the biggest update FaceTime has seen in years. It’ll make FaceTime way more competitive in the overall video chat market. But the question remains: are people still using FaceTime?

Pulling out all the stops — Android users are getting baseline FaceTime calls. iPhone users, meanwhile, are getting a slew of other new features to make sure you never want to use any other video calling app on your Apple products.

One of the more usable updates centers on shared watching and listening experiences from afar. Through SharePlay, users will now be able to watch content in sync with everyone else on a call, either through picture-in-picture or by casting the content to an Apple TV. You know, just as we’re all finally leaving our houses and hanging out in person again. Always right on it with the timing, Apple.

SharePlay is going to be available as an API, so any developer will be able to integrate it into their service. Hulu, HBO Max, Disney+, Twitch, and TikTok have already signed on board.

FaceTime is also getting a few new quality-of-life features that should make video calls a little smoother. There’s a new mic-isolating feature, which uses on-device intelligence to get rid of background noise. Portrait mode is also coming to FaceTime to blur out whatever strangeness is going on behind you during a call. It probably won’t take care of the triple-chin. How convenient Apple has a way to help with that: Fitness+, which is getting a few new features, too.

A little late on this, don’t you think? — FaceTime was overdue for an update. Apple has let its video calling app coast for far too long.

For the most part, FaceTime’s new features are shadowed by this long-standing sameness. FaceTime is buggy. Since its inception, you haven’t even been able to watch YouTube with a friend on FaceTime, because the app automatically lowered the volume on other applications to unlistenable levels. By now many users have found workarounds and other software to take care of these needs because FaceTime couldn’t take care of everything they needed. Will an update bring them back?