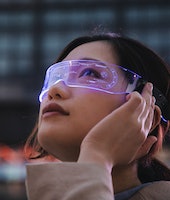 Facebook’s long-rumored smart glasses could soon be available for purchase, according to Andrew Bosworth, the company’s vice president of augmented and virtual reality. Well, the exact release date is iffy, but he says they’ll be ready “sooner than later” in 2021, Bloomberg reports.

The smart glasses will be made in partnership with the Luxottica Group, Ray-Ban’s parent company (and basically a monopoly when it comes to premium eyewear). But the glasses will be missing at least one long-awaited feature: augmented reality.

Facebook CEO Mark Zuckerberg announced the partnership with Ray-Ban at last year’s Facebook Connect event, which focuses on everything virtual and augmented reality. The smart glasses won't be capable of AR, that functionality will have to wait for separate hardware. Facebook originally announced its plans for AR glasses all the way back in 2017.

Betting big — Though we’ve known of Facebook’s smart glasses idea for a few years now, it’s only recently that we’ve come to understand the full extent of the company’s dedication to the product. The company’s virtual reality, augmented reality, and hardware teams now comprise more than 6,000 employees, according to someone familiar with Facebook’s staffing Bloomberg spoke to.

It’s unclear at this point how many different pairs of smart glasses Facebook is working on. The smart glasses Bosworth is referring to won’t utilize AR, but there’s also the Project Aria initiative, which definitely includes AR and might include VR, too. We know even less about Project Aria than we do about the AR-free smart glasses, beyond the knowledge Aria is internal for now and a long way from commercialization.

In any case, there are at least a few pairs of smart glasses — or similar — coming through Facebook’s crowded product pipeline.

Glasses are in — Facebook is putting enormous resources into its smart glasses and other future-looking hardware. So are plenty of other tech companies.

When Google released the prototype of Google Glass back in 2013, there was virtually no market for smart glasses. The general public just wasn’t ready to contend with the privacy conundrums implicit in wearing a stealthy computer on your face.

But it’s a new decade, and it seems like the tech world is ready to give smart glasses a try once again. And that means Facebook’s experiments are only the tip of the iceberg — Apple is also reportedly close to releasing a relatively affordable pair of smart glasses with a LiDAR scanner.

And though some fans of smart glasses might be disappointed by the lack of AR in Facebook’s first market entry, other, similar smart headsets have actually benefited from that exclusion. With Facebook’s weight behind the glasses, they’ll probably sell well, too… even if you have to share all your personal data with Facebook to use them.