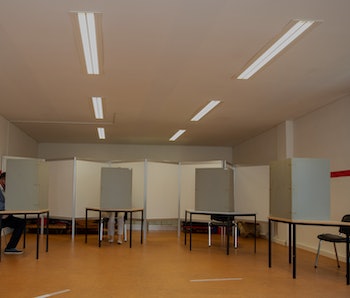 Thanks to the coronavirus pandemic, there's a big shortage of poll workers registered to help in the upcoming presidential elections. Many people are expected to vote by mail, but workers are still needed to staff polling stations for those who want to vote in-person.

Young people need apply — Facebook wants to help by encouraging its users to sign up and volunteer. Beginning this weekend, all U.S. users over the age of 18 will see a message in their News Feed linking them to their state's poll worker registration site. Younger voters are especially encouraged to volunteer because poll workers have typically skewed older and are therefore more vulnerable to the effects of COVID-19.

A dearth of poll workers could result in long lines and miscounted ballots. They're also key in validating the identities of everyone who receives a ballot.

Besides encouraging users to help out, Facebook is also offering paid time off to its employees who want to volunteer at polling stations. Other employers who have committed to doing so include Microsoft and Starbucks.

Trump's mail-in ballot attacks — At the same time, Facebook's platform has been used by President Trump to dispute the reputability of mail-in voting. The company recently labeled a post in which he encourages supporters to vote by mail and then visit their local polling station to see if their vote was counted. So, you could argue that Facebook, by allowing these posts, is in effect encouraging people to vote in-person when voting by mail has been found to be a totally safe and legitimate way of casting a ballot during the pandemic.

To address concerns that Trump will cast doubt on the election, Facebook plans to stop accepting new political ads a week before the election and is considering taking action against posts that dispute the election results or claim a false victory. Though, considering that Trump frequently tries to discredit social media companies as being biased in favor of Democrats, it doesn't seem like labeling his posts with fact-checks would accomplish much.