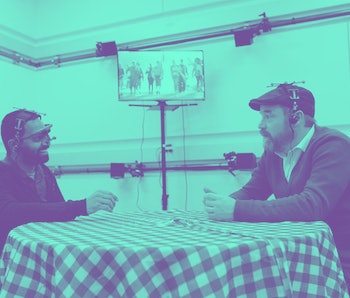 Facebook has quietly been developing AR glasses within its FRL Research team, and today released details on an AR system that would give you "perceptual superpowers" by enhancing your hearing. The technology could have various applications, such as making it easier to hold a conversation in a crowded bar or restaurant.

The technology works by using microphones to pick up audio, and contextual cues to figure out exactly what you're trying to listen to. It sounds like existing hearing aid technology, except Facebook could use sensors or the tracking cameras from its existing Oculus VR headsets to isolate and amplify only the sounds it knows you care about. This could also be implemented into the VR headsets themselves — if you know which direction a wearer is pointing their head, you could amplify sounds in a virtual environment from that area and dampen background noise.

If you were having a conversation with friends inside VR, the experience would feel a lot more accurate.

Facebook's AR and VR strategy — It was long unclear why Facebook has been investing so much in AR and VR technology. It became a lot more obvious when the company recently announced it will force Oculus users to authenticate with a Facebook account going forward. The company is betting that AR and VR will be the next great computing platforms after the smartphone.

As we've seen with Apple, wielding control over developers and charging commissions on in-app purchases, owning the platform can cement a company's dominance. Facebook wants to own the hardware that apps run on so it's not subject to Apple's whims and can piggyback off the success of any new apps that are built for the platform.

Privacy concerns — Certainly there are privacy implications with this superhuman hearing technology. Like, would you be able to eavesdrop on people at the table next to you? Facebook basically says "trust us" — it's designing the technology with privacy in mind, rather than incorporating that after the fact as it did with its namesake social network. It suggested it could block wearers from listening in on others unless they also have a headset and grant permission, for instance. And it says the technology isn't good enough to listen in from far distances anyway.

Facebook could theoretically eavesdrop on you itself. Many people think it already does, and often swear that ads appear on the social network about things they've just been talking about. The truth is that the company already knows so much about its users from tracking them online, in the digital sphere, that it doesn't really need to eavesdrop on conversation.

There's no word on when this technology might be implemented in a consumer product.