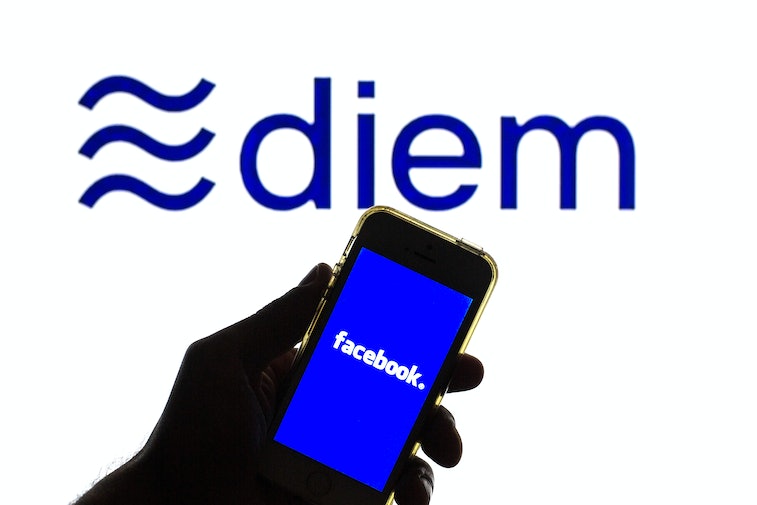 Facebook is going to launch its planned cryptocurrency, Diem, by the end of this year. That’s according to David Marcus, the head of F2, short for Facebook Financial.

Marcus told Protocol in an interview that a cryptocurrency like Diem could enable more people to gain access to the digital banking system who otherwise would otherwise rely on cash and cumbersome, expensive payday-loan-like systems to cash checks or send money to friends and family. Many banks still charge fees just to manage a simple checking account, as well as fees for international transfers. Diem would make all of that free.

Facebook first announced its foray into digital payments in 2019, but took a step back following scrutiny by regulators worried it was trying to replace the U.S. Dollar. Facebook eventually renamed the currency and found new partners to join the independent Diem Association that will guide decision-making for the currency.

Digital money — Marcus likened Diem’s innovation to the way that sending text messages used to be expensive, but is now nearly free. Whereas sending a text message once might have cost you 25 cents, today messaging is effectively free. But money is still expensive to move around because of legacy banking systems that often don’t communicate interoperably. Diem would use entirely new, open internet protocol to make sending money free, like sending someone an IM.

Facebook believes, according to Marcus, that it’s well suited to develop a cryptocurrency and associated wallet — Facebook’s is called Novi — because it’s already been in the payments business for a long time. The company reportedly processed about $100 billion in payments in the last 12 months, through its Messenger app as well as its shopping experience on Instagram.

Cryptocurrencies already exist with similar promises to democratize finance, but nobody really uses them for anything but speculation. Wallet apps like Coinbase remain clunky, and you also can’t easily send cryptocurrency through a widely used app like Facebook Messenger. Digital currencies like bitcoin have wildly fluctuating prices, not great for remittances. Facebook’s Diem is supposed to solve these issues. Novi would be intuitive to use, integrated with its apps, and accessible to people without a bank account. The Diem currency will be pegged to the US Dollar, so it’d be purely for transactions.

The trust problem — Eventually the idea is that anyone could send and receive money, to anyone else, without any fees or headaches. That all sounds nice, but Facebook also plans to make money from Diem. The company will offer payments services to merchants and charge a fee when users purchase goods. By moving away from traditional banking, Facebook won’t have to pay a fee to the Visas and Mastercards of the world. It will take the fees for itself. That’s not exactly altruistic.

Facebook has never had anyone’s benefit of the doubt. Maybe it should fix its poor reputation and lack of trust before trying to solve such a thorny issue like banking, an area where people already distrust existing players, and which is understandably sensitive.

Distract and deflect is an age-old PR tactic, but people haven’t forgotten all the harmful misinformation Facebook has allowed to spread, or its attempts to connect its apps to become stronger, and they don’t trust it. Its services are free because they’re supported by personalized advertisements, and people might accept that trade-off. But Facebook always said that it would make the world more open and connected, and amid years of controversies, it still hasn’t been able to make the case that it’s a net positive for the world. Giving it more power is a concern for people. Giving it control over their money is, understandably, terrifying for some.