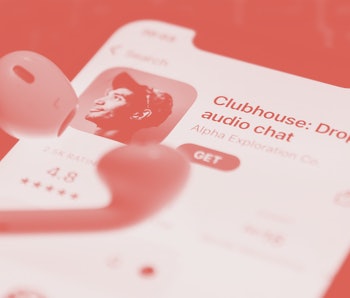 Facebook has already copied Clubhouse, the live audio chat app that has seen massive growth in popularity in recent months as people look for a casual place to chat while gathering places like bars and restaurants remain restricted.

Hotline, as it’s called, is basically the same idea as Clubhouse — a user can host a live talk show using audio or video, and audience members can submit questions through audio or text. The only major difference from Clubhouse is that Hotline supports video, whereas Clubhouse is an audio-only experience. The service is only in closed beta right now, TechCrunch reported this week, and it’s only available as a web app. Weirdly, users are required to sign up for Hotline using a Twitter account.

The development of a Clubhouse clone by Facebook was first reported back in February.

Hotline’s quiet launch comes following reports that Clubhouse recently ended acquisition talks with Twitter. The dominant social media company was reportedly considering buying out the one-year-old startup for $4 billion dollars. Clubhouse, which has already raised more than $100 million in funding is now said to be raising new money at that valuation. The app has more than 10 million users.

Audio-only discussions appeal to people who may not necessarily like text-based communication, as voice can convey more emotion and nuance. Users have to be careful about what they say off the cuff, however, as listeners could be recording the conversations.

Cloning — Twitter has simultaneously been developing its own Clubhouse clone, as the rise of the startup risks chipping away at its place as a live gathering place. The company’s identical product is called Spaces and is built directly into its main app. Many big Clubhouse users found audiences by encouraging their Twitter followers to download the app, so it’s possible that folding the product directly into Twitter could prove fatal. According to data from Sensor Tower, Clubhouse’s download rankings have been on a decline over the past month.

Clubhouse could still survive. The app has attracted the interest of many celebrities, from Elon Musk to Drake, and it recently launched a tipping feature so creators can earn money hosting popular discussions. And Snapchat and TikTok continue to thrive despite attempts from the tech giants to clone those products.

Facebook has received scrutiny from legislators over its acquisition of Instagram, as emails revealed that the photo-sharing app’s co-founders were worried they’d be crushed if they didn’t give in and sell the company. That would make the company unlikely to try and acquire Clubhouse, which would be for the best if it means other, independent social networks can compete and force Facebook to improve in areas like privacy. Facebook could still promote Hotline to its billions of users and hit Clubhouse’s growth, however.

Hotline is being developed within NPE, Facebook’s experimental app development branch. The group recently released another app called BARS, an app where users can record raps against a beat and share them to the community.