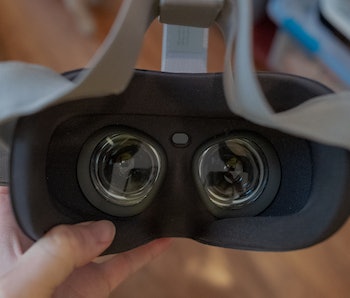 Facebook is further linking Oculus to the mothership. The company has announced that the annual Oculus Connect virtual reality conference has been renamed as "Facebook Connect," after it recently moved to require that users have a Facebook account for logging into their Oculus hardware going forward. Anyone who wants to use an Oculus headset but doesn't want to support Facebook's greater business is now SOL.

The company is also renaming its entire Oculus VR division as Facebook Reality Labs. Facebook says the rebranding is meant to bring together Facebook's disparate computing initatives under one roof, including the Facebook Portal video chat device and its Spark AR toolkit for creating camera filters. Anything that helps people feel more present with each other even when apart will now fall under the new division.

All good things — Oculus has traditionally been thought of as a "dumb" headset in that you can connect it to your computer and use it to run whatever applications or games you'd like. In that sense it was unclear how it fit as a subsidiary of Facebook, but now we're seeing the plan. Oculus makes best-in-class virtual reality headsets, and Facebook wants to make sure anyone interested in using them has to also use its platform.

Eventually, Facebook might layer on its own social features and, like Apple or others, it could charge developers to offer their apps on Oculus and dictate who can be successful and who cannot. Oculus already has its own store through which developers can offer apps, and Facebook takes a cut of sales there, but heretofore it hasn't been forced.

Platforms, platforms, platforms — Facebook wanted to control another platform, the smartphone, but was never able to make an experience that consumers wanted. Its reskinned Android phones were a total flop. Now it's trying again with Oculus in hopes that virtual reality will take off and it will wield all the power there so it can harvest more data, throw up more ads, and charge anyone else who wants to be successful. Platforms are able to cement power like that, an issue that lawmakers are now investigating for potential anticompetitive behavior.

Another way that tying Oculus closer to the mothership helps Facebook is that it would make it more difficult for regulators to split the companies apart under any antitrust ruling. Experts have speculated that's why the company has made other similar moves, like Facebook working to connect the messaging functions of its disparate chat apps Facebook Messenger, WhatsApp, and Instagram.