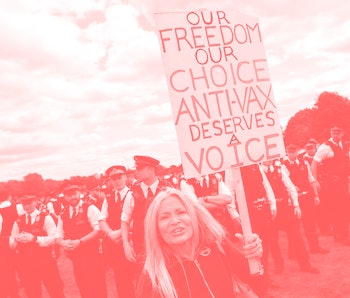 Facebook is dropping the banhammer yet again. The company said today that it will prohibit advertisements that discourage people from getting vaccines. It follows recent bans on content that denies the Holocaust, and any content from the fringe QAnon conspiracy movement.

The company says the move to ban "anti-vax" ads is in the interest of helping people stay healthy while the world awaits a COVID-19 vaccine. Getting the flu makes people more vulnerable to the worst consequences of the coronavirus.

Expanding the ban — Ads that promote vaccination hoaxes — such as by suggesting they're ineffective or dangerous — are already prohibited, but the new policy expands on that by banning any ad that even discourages someone from getting a vaccination. The one exception is that Facebook will allow advertisements that advocate for or against legislation regarding vaccines. But those must go through more a thorough vetting process.

The company is more lax about political ads, so scrutiny over vaccination ads is surely to continue to some extent.

Facebook will also direct people to information about the flu vaccine and how to get one, including a tool that shows the nearest location to get the vaccine. It already surfaces information from the CDC and other reputable health organizations when users search for vaccine-related content.

Public health experts worry that vaccination skepticism will mean that once a COVID-19 vaccine is available, many people may opt-out of getting it, thereby making it harder to stop the disease's spread. Critics of Facebook think it hasn't acted fast enough to crack down on vaccine hoaxes, like one suggesting that Bill Gates is planting microchips in vaccines (the phone in your hand already tracks you well enough, so it's unclear what a microchip would even be useful for).

Backup plan — A slew of recent content crackdowns may be an acknowledgement by the company that Joe Biden has a real chance of becoming the next president, and his stance on Facebook is notably more critical than President Trump's. Biden has said he "hates Facebook" and that he thinks regulators should take action against the company for not taking a harsher stance on Trump's false posts about mail-in voting.

CEO Mark Zuckerberg appeared to be anticipating the Trump administration would continue leading for another four years, in which case any deference towards him would pay off. But Facebook needs to hedge its bets now that polls are leading in Biden's favor. Zuckerberg previously defended allowing Holocaust denialism to remain on the platform as a form of free speech but has since decided it could incite violence.

Misinformation will still be able to spread elsewhere on the web, but Facebook has a large audience of older adults who disproportionately share false stories. It continues to allow users to share anti-vax content, but it supresses the spread of such posts by de-ranking accounts that promote vaccine misinformation. That addresses the complaint that Facebook often takes down misinformation only after its been seen by millions of people.