“As tempting as it is to use the tools available to us to change the outcome, I am confident we must never do that or we will become that which we fear.” 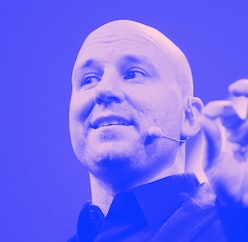 Andrew Bosworth, Facebook executive and man in desperate need of an editor, released a lengthy memo to the company's internal network on December 30, 2019. Bosworth worked in Facebook's advertising division for years, including 2016, but now leads the VR and AR department.

The meandering tome references "The Lord of the Rings," an ousted Kraft CEO, and a disbelief in the radicalization powers of misinformation. The goal seems to be to absolve Bosworth personally as well as Facebook of responsibility for the ascent of the Trump administration.

Political ads — "I find myself thinking of the Lord of the Rings at this moment," reads the memo, discussing Facebook's decision to keep running political ads with lax restrictions. "Specifically when Frodo offers the ring to Galadrial [sic] and she imagines using the power righteously, at first, but knows it will eventually corrupt her. As tempting as it is to use the tools available to us to change the outcome, I am confident we must never do that or we will become that which we fear."

First of all, the whole plot point driving those books is that the ring is evil and must be destroyed for the good of the world. He seems to posit that the ring and its corrupting power is like enacting political ad policies to prevent Trump specifically from using (manipulating) the platform. This ignores that any change to the policy, including not running any political ads at all, would equally affect all parties, and halting all political ads would be the same as just destroying the ring instead.

Facebook is just sugar, guys — "People compare social media to nicotine. I find that wildly offensive, not to me but to addicts. I have seen family members struggle with alcoholism and classmates struggle with opioids ... Still, while Facebook may not be nicotine I think it is probably like sugar," the memo reads, after an anecdote about a Kraft CEO who was ousted after attempting to reduce sugar. "Sugar is delicious and for most of us there is a special place for it in our lives. But like all things it benefits from moderation."

Of course, Facebook is not sugar. It's not even nicotine. Bosworth brings up alcoholism, a widely prevalent addiction backed by a massive industry with huge advertising marketshare fueling a worldwide culture of overconsumption. Everyone knows cigarettes and sugar are bad for you, and they can lead to a host of problems including diabetes and cancer. But alcohol attacks an addict slowly: it chips away at your interpersonal relationships until you're completely isolated, slowly ruins a part of you that you rarely think about, and lowers your tolerance for poison until you take so much it destroys you. It's only when you manage to cut it out of your life completely that you can start to get your loved ones, sanity, and core values back.

Different opinions won't change you — The algorithmic nature of social media makes it easy to radicalize people to all kinds of causes, but Bosworth believes in free will and thought.

"Whatever your political leaning, think of a publication from the other side that you despise. When you read an article from that outlet, perhaps shared by an uncle or nephew, does it make you rethink your values? Or does it make you retreat further into the conviction of your own correctness? If you answered the former, congratulations you are a better person than I am. Every time I read something from Breitbart I get 10% more liberal."

Based on this memo, Bosworth has read maybe three or four Breitbart articles.