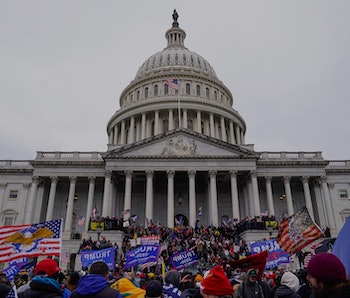 Last week, word leaked of a report circulating on Facebook’s employee message board that found the company could have done more to thwart the January 6 riots at the U.S. Capitol that left five dead. BuzzFeed News was the first to report on the document’s existence, but now the news organization says access by most employees has been restricted.

If Facebook hoped pulling the report would bury its findings, it was wrong — BuzzFeed was able to publish a full copy in its latest story, and restricting it likely only brought more public attention to the document.

“It’s pretty common that critical writing about the company gets removed under some trumped-up excuse if it gains any internal or external traction,” one employee reportedly wrote following the report’s disappearance. “It’s not about the public visibility but the morale effects I imagine.”

Coordinated efforts — Facebook says the report wasn’t intended to be published companywide, and it’s not hard to see why. In it, an internal task force looks at how the insurrectionist movement was able to spread through groups like “Stop the Steal,” and determines that Facebook wasn’t fast enough to slow the spread of hateful rhetoric and incitements to violence.

The report goes into detail about a deep network analysis the company performed in order to understand how harm was able to spread as a coordinated effort. For instance, the company found that a group of individuals served as admins of several right-wing pages, and acted as “super-inviters,” bringing people from popular groups like Women4Trump over to Stop the Steal.

Following January 6, Amy Kremer, an admin of Women4Trump, confirmed that she was an organizer of the Stop the Steal rally that led to the Capital riot later in the day. Ali Alexander, another Stop the Steal organizer, eluded detection on Facebook for his false claims of election fraud by carefully selecting his words.

Transparency — It’s notable that Facebook has admitted the harm its platform enabled, following years of denial by CEO Mark Zuckerberg that the social network could influence politics in any meaningful way. But the company is known to make moderation decisions on the quiet and doesn’t like to do anything that could anger its conservative users, who claim they’re silenced on the platform, even though numerous investigations have proven the complete opposite is true.

Facebook isn’t just Mark Zuckerberg, however — it’s also 60,000 other employees who want to have a say in how the company they work for operates. From now on when the company defends itself saying it has created a safe environment for its users, workers can simply refer to this report. The rejection of even internal transparency shows that not even Facebook knows hows to fix itself.