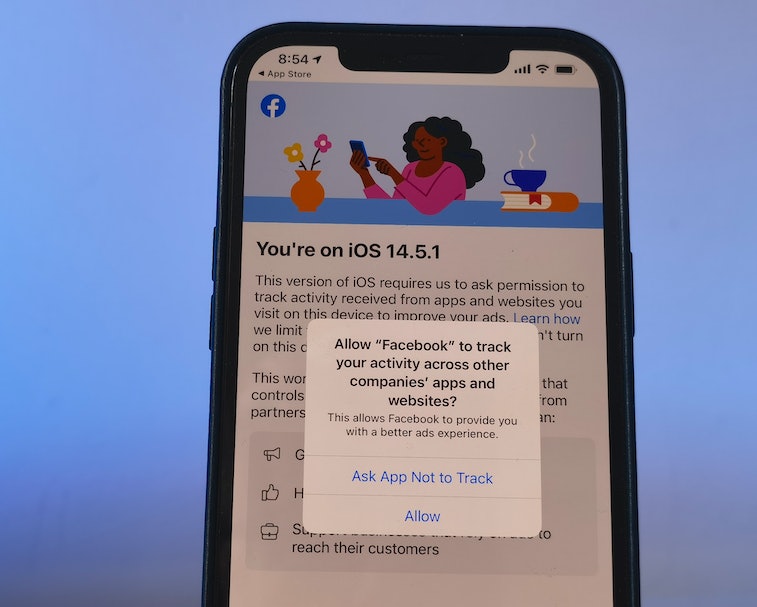 In an uncharacteristic bout of frankness, Facebook has conceded that the privacy measures introduced in iOS 14 (and expanded in iOS 15) are impacting its ability to provide advertisers with detailed information about the performance of their campaigns. The social media giant fought intensely against Apple’s plan to introduce App Tracking Transparency (ATT), which by default prohibits apps from sharing information with outside websites.

App-based user tracking has been fundamental to Facebook’s advertising business, as it allows the company to log when a user taps on an advertisement and then goes on to complete another action, like buying an item on an external website, for instance. Facebook prizes this type of data because it uses it to prove to advertisers how well their advertisements are working.

With the introduction of ATT, Apple now prompts users when they open an app whether they’d like to allow it to track them. Understandably, few people opt-in. For Facebook, that means when someone clicks on an ad in the Facebook app what they do thereafter may remain a mystery. It also makes it harder to know when to retarget someone by showing them ads for something they looked at on the web but didn’t buy.

Existential threat — The entire advertising apparatus Facebook has created allows it to efficiently target advertisements at individuals based on very specific information it has collected on them — their likes and interests, for instance. Combining that with tracking capabilities of the modern web, and Facebook (alongside Google) has created a monster advertising business. Small and large businesses alike can quickly buy advertisements on Facebook through a self-serve portal at relatively affordable prices, because they’re targeting specific people rather than broad audiences. And because Facebook is one of the only options, many companies feel they have to buy ads on it, because their competitors are.

Without detailed tracking, however, the value of those advertisements falls a lot, and advertisers need to spend more to get the same conversion rates. Mudd told advertisers in his post that Facebook has “heard from many of you that the impact on your advertising investment has been greater than you expected.”

Google is less susceptible to harm from Apple’s changes because it targets advertisements in search results, where it knows what you’re looking for. Facebook is no longer as precise, at least not for iOS users who’ve opted out of letting the company track them.

Trust begets trust — There are valid arguments for and against this type of targeted advertising. On the one hand, Apple has a point that Facebook makes it too complicated for the average person to really understand what’s happening with their personal information. And Facebook has shown time and again it can’t really be trusted with user data. At the same time, many small businesses have grown thanks in part to the efficiency and low cost of Facebook advertising. For consumers, they get free services like Instagram in exchange for their data.

Maybe consumers would be fine with that trade if they trusted Facebook more, but the company has repeatedly abused any trust placed in it.

Naturally, Facebook is working on new features to make up for data lost due to ATT and find other ways to report performance to its customers. And despite Apple’s move, the company still expects to grow its profits this year. So don’t feel too bad for it.