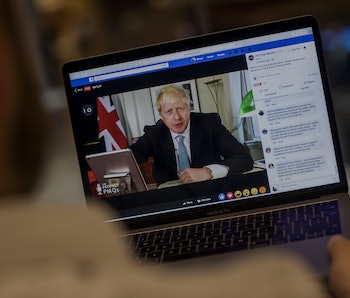 Facebook is launching a slew of new features for its Facebook Live service over the coming weeks as the world's population is marooned indoors and turning to video as a substitute for face-to-face interaction. The most interesting features are aimed at making live content more accessible to viewers.

Digital goes analog — Facebook is introducing an audio-only mode, for those who don't want to watch the video or don't have enough data to do so. Other companies like YouTube have been reducing quality of video streams in an effort to alleviate strain on internet providers dealing with increased activity, so this could be useful if your connection becomes particularly slow.

Facebook is even introducing a feature that will allow people to tune in to a broadcast even if they don't have a smartphone or Facebook account — streamers will be able to generate a toll-free number so viewers can call in to listen to the audio.

Streams will also become accessible outside of Facebook, presumably with embed codes that allow them to be placed on other websites.

Musicians can monetize their streams now — One change aimed at streamers is an expansion of Facebook's Stars function, which allows viewers to gift some money to their favorite creators. Whereas before the feature was limited to gamers, now musicians and cultural institutions will be able to accept contributions, a nod to the fact that musical events and public gatherings are nonstarters right now. The update puts Facebook Live on par with Twitch, which is already being used by musicians to raise money for COVID-19 response efforts.

Since schools have moved to remote classes for the indefinite future, Facebook is going to be providing educational institutions with mobile phone accessories to help them go live. It doesn't say what exactly these accessories are, though.