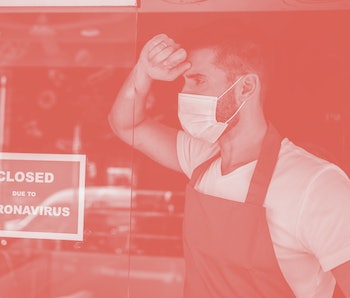 Facebook threw a not-so-subtle jab at Apple today for taking 30 percent commissions from developers during the coronavirus pandemic. In a blog post the social network announced that it's launching the ability for businesses to host paid video events on Facebook, and said it won't take a cut of sales for at least a year. It added, however, that Apple was unwilling to make the same concession and will still charge a 30 percent fee when events are purchased through the iOS app.

"We asked Apple to reduce its 30% App Store tax or allow us to offer Facebook Pay so we could absorb all costs for businesses struggling during COVID-19," the company wrote. "Unfortunately, they dismissed both our requests and SMBs will only be paid 70% of their hard-earned revenue."

The news follows yesterday's scuffle between game developer Epic and Apple over the same 30 percent fee. Epic attempted to sidestep it for in-app purchases in its game Fortnite, Apple pulled the game from the App Store, and Epic then hit Apple with a lawsuit, all in quick succession.

Facebook pot calling the Apple kettle ruthless — Facebook went to great lengths to emphasize how ruthless it believes Apple is being during an economic recession, even sharing a side-by-side comparison of the event experience on iOS and Android, where Google won't take a fee. In the iOS app, meanwhile, a fine-print disclaimer from Apple explains it taking its pound of flesh.

Facebook says paid events could help small businesses continue serving customers even as social distancing mandates remain in place. A yoga instructor could offer remote classes, for instance, or a chef could host cooking lessons. These events will initially be set up as one-way video streams with text chat enabled, but Facebook says it's also experimenting with using Messenger Rooms — Facebook's equivalent of Zoom — so guests can interact with the host.

Apple and Facebook have an acrimonious relationship, for years publicly attacking each other over the issue of privacy where their philosophies couldn't be more different. Facebook was also recently forced to remove mini-games from its Facebook Gaming app because Apple considered it to be an attempt to side-step the App Store.

Of course, Facebook's move isn't altruistic. As with everything the company does, it's self-serving. And it's likely an attempt to deflect some of the bad press it's faced in recent days, weeks, months and years... including last month's damaging mass boycott from advertisers due to its ongoing unwillingness to meaningfully combat racism, hate speech, and misinformation on its platform.

Apple the mafioso – Numerous critics (including Facebook) argue Apple is being anti-competitive because its closed marketplace doesn't allow developers to sell directly to consumers, nor does it allow gaming streaming services other than its own. Instead, developers must adhere to its rules and pay its fees or have their apps removed from one of only two major marketplaces where they can sell their wares. Apple, meanwhile, can release competing apps that are pre-installed on every iOS device and aren't subject to the same policies. Furthermore, iOS users cannot install apps outside of the App Store, or alternate application storefronts.

Apple says all these restrictions are to protect consumers from harmful apps. At the same time, the company has become increasingly reliant on revenue from services — including the App Store — to further its growth. So much so, it's expected to launch bundles for its subscription services in October.

Excessively prohibitive — Microsoft's xCloud service provides a strong example of the type of benefits consumers lose out on due to Apple's rules. xCloud is a new game streaming service that gives subscribers instant access to hundreds of Xbox titles for $15 per month. It's not allowed in the App Store, however, because Apple wouldn't be able to review new games added to the service beforehand. This despite the fact that services like Netflix aren't subject to a similar rule. Google's Stadia isn't available on iOS either. Nonetheless, Apple recently launched its own subscription game service called Apple Arcade, which of course it not only allows on the App Store but actively promotes.

Apple has repeatedly said it treats all developers equally, but emails released during recent antitrust hearings revealed that it offered lower commissions to Amazon in order to bring Prime Video to the App Store. Legislators are considering whether to update antitrust laws, but Apple's behavior has likely already repeatedly violated competition law.

In this instance, Facebook is right. That doesn't make it good. It clearly isn't. But it's still right.