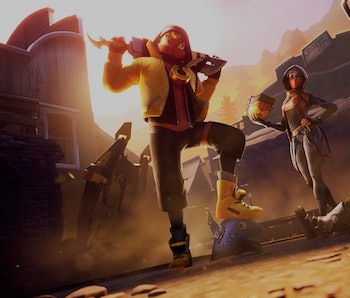 Apple and Epic Games are locked in a game of chicken and the former seems to be winning. The game developer behind the wildly lucrative Fortnite said today it will lose access to Apple's developer tools on August 28 over a spat that began when the company tried to evade Apple's in-app purchase commission last week. Apple plans to close Epic's developer account for releasing iOS and Mac apps, The Washington Post reports, and it will also stop providing Epic with access to software development kits that allow it to design its game engine for Apple devices.

That means theoretically that Epic would no longer be able to release new versions of its Unreal Engine that many other developers rely on to render their own games and movies. Popular games and shows including Fortnite, Mortal Kombat, and Disney's The Mandalorian all use the Unreal Engine, and the fifth version of it is due out soon. Without the ability to operate on Apple devices, many developers will be left in the lurch or while will have to turn to alternatives to bring their product to Apple users.

Epic's PR stunt is... epic — Epic initially sued Apple after Fortnite was removed from the App Store for violating its terms against selling in-game items directly, bypassing Apple's payment system that would take a 30 percent commission. Epic had the lawsuit ready to go as soon as its game was removed, and clearly intentionally set up the fight by knowingly and deliberately flouting Apple's rules.

The developer, which is one of the world's most successful thanks to the outsized success of Fortnite took a gamble by starting this skirmish and getting a top-grossing game pulled from the App Store. It likely believed pushback from Fortnite's legions of fans — which it encouraged — would force Apple to cave under pressure and at least give Epic better terms for in-app purchases, such as by taking a 15 percent commission instead of 30. Apple is, instead, digging its heels in. And no wonder. Bowing to third-party pressure wouldn't be a good look.

Monopoly power — Apple's behavior comes as it faces intense scrutiny from Congress over concerns it abuses its market dominance and over the way it treats developers in its App Store. More than 50 percent of smartphones in the U.S. are estimated to run on iOS, and the App Store is the only way through which independent businesses can distribute their apps. Apple demands commissions on all sales and sets up rules that many developers believe are arbitrary or capricious, with the company enforcing them inconsistently and giving special treatment to some high-profile developers, like Amazon.

You'd think that Apple would see the tides turning after a whole range of major companies from Facebook to Microsoft and Epic, and regulators in the U.S. and abroad, have come out against it. Epic has managed to make Apple look like a schoolyard bully, going so far as to say it was willing to "work things out" with Epic before deciding to put the screws on the company and give it a deadline to negotiate. Apple is basically saying, "Nice game engine, would be a shame if something happened to it." Not exactly a good faith negotiation tactic.

But then, Apple has a lot more than just its share of the revenue from Fortnite to lose. If it bows to Epic, who's to say how many other developers will seek to reduce the fees they pay the tech giant, too? Apple has just as much incentive as Epic to continue fighting, and in many ways, less to lose if it turns out to be a war of attrition.