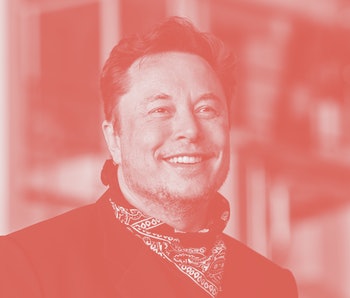 While working to secure enough liquid funds to buy Twitter, Elon Musk had to convince banks his bold ideas for the platform were worth the price of financing. Reports from multiple outlets (like Reuters) suggest Musk was pretty light on details in his conversations with banks, though he did throw a few ideas at the wall to see if anything stuck.

Here’s one way Musk thought he might increase Twitter’s revenue: charging a fee when websites or news outlets want to quote or embed a tweet from verified users. How this would work in practice is impossible to say — if we wanted to insert one of Musk’s tweets here, for example, would we have to go through some approval process? Couldn’t we just use a screenshot instead?

Musk has said he doesn’t care much about whether or not his ownership of Twitter makes money for him, and the bland ideas he’s pitching make that fact abundantly clear. The banks did give Musk his money, though not enough to stop him from selling off billions more in Tesla stock this week.

The ideas guy — Elon Musk fancies himself an ideas man. This is how he’s worked himself up to his current stature: by coming up with big ideas, posturing them to investors and the public, and then only sometimes delivering on his lofty promises. Just take a look at his Boring Company to see the fruits of that non-labor.

Greeted with the need to prove he could add financial value to Twitter, Musk started pulling every last crumb out of his pockets. Musk mentioned the prospect of job cuts in order to improve the company’s bottom line — such a creative solution, really. He told banks he hopes to get influencers and high-profile figures more involved on the platform, too.

Mess at every angle — Musk’s Twitter deal hasn’t even closed yet and already its effects have been chaotic. Many high-profile users have seen their follower counts drop since Musk’s announcement, while conservative extremists on the platform have found themselves with significant boosts.

Musk, meanwhile, is tweeting more than ever, and no, the tweets have not gotten any better. Many concern his thoughts on politics (cringe-worthy), while others continue his streak of being pointedly unfunny (even more cringe).

He may have convinced a couple of banks to give him $13 billion in loans — far, far more than Twitter’s revenue — but that wasn’t enough to seal the deal, either. Musk had to sell approximately 9.6 million shares of Tesla stock this week, worth around $8.5 billion, according to two new SEC filings. Musk tweeted today that he doesn’t plan to sell any more of the company’s stock for the time being, even though he’s really not supposed to be tweeting about Tesla at all.