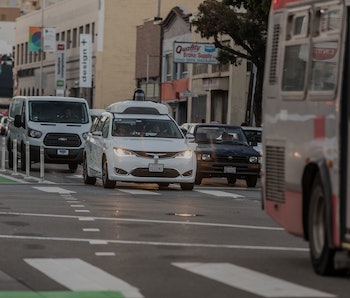 In a public scuffle typical of the Tesla CEO, Elon Musk has said that his electric automaker "has better AI hardware and software" than Waymo, the self-driving subsidiary of Google. The comments came in response to an interview with Waymo CEO John Krafcik, in which he downplayed Tesla's technology as more of a "really good driver assistance system," rather than true self-driving.

Baiting Elon — "It is a misconception that you can just keep developing a driver assistance system until one day you can magically leap to a fully autonomous driving system," Krafcik added. "In terms of robustness and accuracy, for example, our sensors are orders of magnitude better than what we see on the road from other manufacturers."

Tesla's move to eschew expensive LiDAR sensors, which capture 3D models of objects around them, is largely at odds with the rest of the autonomous driving industry. Most other players believe that a suite of sensors provides the redundancy and accuracy needed to keep riders safe. Tesla's bet is that its existing network of cars, which are outfitted with several standard cameras, can train a neural network to learn from how human drivers respond to their surroundings and achieve the same levels of safety.

Philosophical difference — The automaker has been criticized, however, for promoting the technology under the "autopilot" branding even though drivers are required to keep their attention on the road in the event the software errs. Experts believe the gray area between semi-autonomous and fully driverless systems is dangerous because it lulls drivers into "autonomous complacency," and they may not take the wheel fast enough to avoid incidents. For this reason, some believe cars should be either fully autonomous or not at all. Waymo cars are designed from day one to operate entirely without a human driver.

Drivers of Tesla's can today pay for the opportunity to test out a beta version of its "Full Self Driving" system in their vehicles. Early videos show the feature still needs drivers to correct it when it fails to notice medians or stop signs. In the past, several fatalities have been caused when drivers took their eyes off the road and their vehicles in Autopilot failed to recognize concrete barriers or other objects. German regulators, meanwhile, have forced Tesla to stop using the phrase "Full Self Driving" there because they've deemed it misleading.

TBD — These are still early days, and there's yet no definitive "winner." If Musk turns out correct and the pricey technology kitting out a Waymo car isn't necessary, Tesla could potentially dominate the self-driving field. The most affordable Tesla, the Model 3, starts at $38,000. Waymo expects cars with its technology to initially cost roughly $100,000.