Elon Musk, in a Clubhouse talk 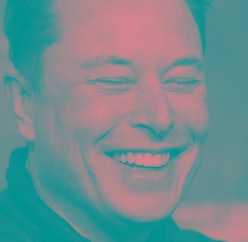 Last night Elon Musk, the world’s richest man, took to voice-only social network Clubhouse to chat about everything and anything he wanted. Musk spent part of his somewhat-impromptu talk speaking about Neuralink, his brain-computer link pet project. And by pet project we mean he truly does have animals hooked up to this thing.

Musk revealed during his Clubhouse chat that Neuralink has hooked up a live monkey to the brain-computer link, and that the monkey is thriving with the device connected to its brain. In fact, the monkey is actually using Neuralink sensors to play video games.

“We have a monkey with a wireless implant in their skull with tiny wires who can play video games with his mind,” Musk said on Clubhouse, Bloomberg reports. “You can’t see where the implant is and he’s a happy monkey. We have the nicest monkey facilities in the world. We want them to play mind-Pong with each other.”

We have many questions, not the least of which is: what kind of video games is this monkey playing? Is the monkey only playing Pong or can he pop in something more complex like Cyberpunk 2077, one of Musk’s recent favorites?

We don’t know much — Of Musk’s many, many endeavors, Neuralink is one of the most secretive. The startup was founded in 2016 by Musk and a few others, but the company has only very recently made any of its labors public knowledge.At the end of last summer, Neuralink provided a relatively quick — but still enlightening — live-streamed presentation of its research.

Here’s what we know about the state of the company’s research: the latest version of the Neuralink implant, at least as of August 2020, is about 23mm x 8mm, with an impressive 1,024 channels for sending and receiving signals. The device uses paper-thin wires, inserted directly into the brain, for communication purposes.

Besides these basics, though, Neuralink’s research is still very much shrouded in secrecy. We already knew the device had been tested in pigs with some success — but monkeys having the ability to play video games with it is an entirely more significant step toward the company’s lofty dreams.

Sky-high dreams — Neuralink’s dreams don’t stop anywhere near helping monkeys blow of some steam on the Xbox. The company hopes its technology will be useful for health and disability issues that current tech just can’t handle: curing paralysis, deafness, and blindness, just for starters.

Using Neuralink implants to overcome disabilities is still a pipe dream for now, though; as far as we know the company hasn’t actually found success in “curing” paralysis just yet. And though the prospect of doing so is wonderful, many neuroscientists and other experts have criticized Neuralink’s goals as simply impossible. MIT Technology Review, for example, called them “neuroscience theater.”

Musk says we’ll see videos of monkeys using Neuralink tech to play video games in a month or so. As for working demonstrations on humans — well, we’re not holding our breath for now. One thing’s certain, though: Musk will keep throwing money at the project until its success or bitter failure.